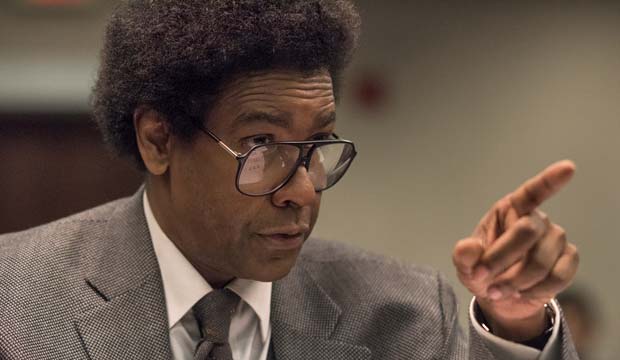 Denzel Washington (“Roman J. Israel, Esq.”) is a longshot to win Best Actor, sitting in fifth place in our combined Oscar odds. There are lots of things working against him: Gary Oldman (“Darkest Hours”) is an indisputable frontrunner; he has zero precursor wins, not even from a tiny regional critics group; it’s hard to win a third acting Oscar (he was much better positioned last year for “Fences”); and his is the only nomination for his film.

In Oscar history, there have only been five times when Best Actor went to a film with no other nominations. Washington will try to join the club that includes inaugural Best Actor winner Emil Jannings (“The Last Command” and “The Way of All Flesh”), Jose Ferrer (1950’s “Cyrano de Bergerac”), Cliff Robertson (1968’s “Charly”), Michael Douglas (1987’s “Wall Street”) and Forest Whitaker (2006’s “The Last King of Scotland”).

The infrequency of this is not surprising. Most films that are made and are recognized by the Oscars are male-led. There have been 27 instances of Best Picture and Best Actor going to the same movie, and even when they don’t, the Best Actor champ usually comes from a film that has a Best Picture nomination — which all of Washington’s rivals’ films have. In this century, only three times have leading men won without a Best Picture nomination for their films: Whitaker, Jeff Bridges for 2009’s “Crazy Heart” and Washington himself for 2001’s Training Day.”

A sole nominee winning Best Actress is more common. It’s happened 12 times, most recently with Julianne Moore finally receiving her first Oscar three years ago for “Still Alice.” It’s also far more common for a Best Actress lineup to be populated with women whose films are not up for the top award. This was the case Moore’s year (Felicity Jones’ “The Theory of Everything” was the only Best Picture nominee) and last year, with winner Emma Stone hailing from “La La Land.”

Refreshingly, four of this year’s Best Actress contenders are from Best Picture nominees, save for Margot Robbie (“I, Tonya”). Her dark comedy, which was up at the Producers Guild Awards, probably just missed the cut, which is more than you can say for Washington’s legal drama that came and went with little fanfare.