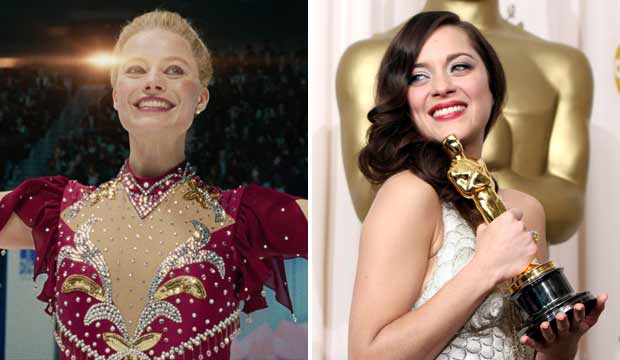 Most of the Oscar conversation for Best Actress has surrounded Frances McDormand (“Three Billboards Outside Ebbing, Missouri”) and Saoirse Ronan (“Lady Bird”). But I think we need to take Margot Robbie (“I, Tonya”) a lot more seriously as a threat to win, especially when you consider how eerily similar this race is to the Best Actress contest in 2008. Marion Cotillard won that award for “La Vie en Rose,” and Robbie could follow a strikingly similar path to the awards stage.

“La Vie en Rose” and “I, Tonya” are markedly different films, of course, but both Cotillard and Robbie transform themselves into real, recognizable characters: Cotillard played French singer Edith Piaf, and Robbie portrays figure skater Tonya Harding. Cotillard won on her very first nomination, and this would also be the first Oscar bid for Robbie. In addition, Cotillard went into Oscar night in a divided field where she wasn’t necessarily the frontrunner. The same may turn out to be true for Robbie.

Christie had won Golden Globe, Critics’ Choice and SAG Awards that year, and McDormand is on a similar trajectory, having already won at the Globes and Critics’ Choice and currently ranking as the SAG frontrunner in our latest predictions. But there is one significant difference. Cotillard won Best Film Comedy/Musical Actress at the Globes, while Robbie lost to Ronan. Then again, Robbie subsequently upset Ronan for Best Actress in a Comedy at Critics’ Choice, so we could probably call that a draw since neither the Globes nor Critics’ Choice have any voters in common with the motion picture academy anyway.

But if McDormand does indeed win the SAG Award, we might have to look ahead towards the BAFTAs for Robbie’s greatest hope to generate momentum in advance of the Oscars. Cotillard won Best Actress from the British academy before her Oscar win, which signaled that her industry peers had rallied behind her. That might be a slightly tougher challenge for Robbie than it was for Cotillard: “La Vie en Rose” was a French film, and the BAFTAs are typically Euro-friendly. On the other hand, the BAFTAs are also American-friendly when you consider that their last three Best Actress winners were American actresses in US productions (Julianne Moore in “Still Alice,” 2015; Brie Larson in “Room,” 2016; Emma Stone in “La La Land,” 2017). And before that Cate Blanchett, an Australian like Robbie, won for “Blue Jasmine.”

Do you think Robbie has a chance to upset the Oscar frontrunners?

Oscars: Every woman who won Best Actress for playing a real life person