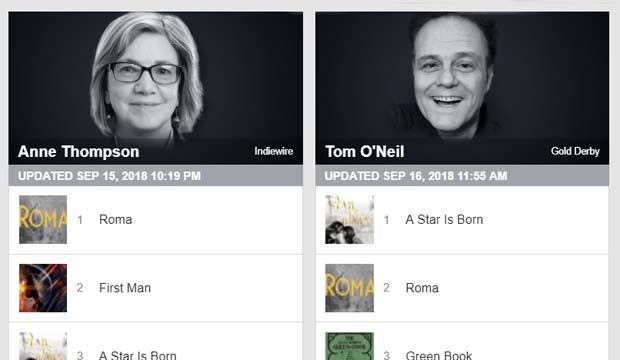 They came, they saw and they passed judgment — in Venice, Telluride and Toronto.

Most of the hotly anticipated early fall titles have now been seen by journalists and other media insiders at these recently wrapped film festivals — and the awards outlook has shifted as usual. The favorite to win Best Picture at the Oscars at the end of August for both Experts and Users at Gold Derby was Spike Lee‘s “BlaKkKlansman,” which has dropped to fourth place — still in the running, but less strong.

As for which movie is on top for now, the Experts and Users are split. See how the cinematic pros rank their projected nominees according to likelihood of winning. All 20 predict a Best Picture nomination for “Roma,” Alfonso Cuaron’s black-and-white visual dazzler inspired by his childhood in ‘70s Mexico ,that claimed the Golden Lion prize in Venice. The Netflix production could be the first film by a streaming outlet to compete for Best Picture at the Academy Awards. Last year’s Lion-ized champ, Guillermo del Toro’s Cold War fantasy “The Shape of Water,” would go on to win the top Oscar.

Users, however, are over the moon for “First Man,” with more than 1,500 including it in their list and 386 having it as the winner. “Roma” is the No. 2 choice with more than 1,400 choosing it  and 364 declaring it the champ.  In third place is “A Star Is Born,” actor Bradley Cooper‘s directing debut, with 1,400-plus supporters but with far fewer — 266 – foreseeing a Best Picture triumph.

A few sleepers are lurking just below the Users’ top  10. “Green Book” marks Peter Farrelly’s first solo directing effort without his “Dumb and Dumber” partner, brother Bobby. A real-life story set amid racial unrest in the ‘60s focuses on a friendship shared by an Italian-American bouncer (Viggo Mortensen) and a Jamaican-American jazz musician (Mahershala Ali of “Moonlight”) has been compared to such crowd-pleasers as “The Help” and “Hidden Figures,” both of which made the best-pic cut. It received an enthusiastic standing-ovation at its Toronto premiere. Ten Experts, including me, have it in their top 10. Expect more to include it since it just won the coveted People’s Choice Award at TIFF, which often leads to Oscar attention. The film opens on November 21, right in time for the holidays.

Of course, until these films actually are seen by the ticket-buying public, their fates are still open. “A Star Is Born” kicks off on October 5 and “First Man” lands on October 12. The wait will be longer for “Roma” (December 18).

But now that the addition of a Best Popular Film category has been postponed, “Black Panther” has shown staying power, ranking No. 6 with Experts and No. 9 with Users. If the spring release  hangs in there, it would be the first superhero film to ever enter the Best Picture fray.

Be sure to check out how our Experts rank this year’s Oscar contenders. Then take a look at the most up-to-date combined odds before you make your own Oscar predictions. Don’t be afraid to jump in now since you can keep changing your predictions until just before nominations are announced on January 22.