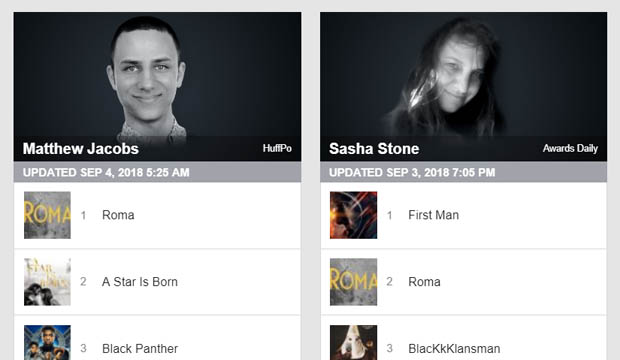 Lots of frisky horses darted out of the gates at the Telluride and Venice Film Festivals, tripping up the Oscar derby — just the way we like it. But which ones really broke out of the pack?

All Oscarologists knew that “First Man” would be great – director Damien Chazelle (“La La Land,” “Whiplash”) never disappoints – but, yeowsa, he blasted through the stratosphere of high Oscar hopes again. Now it is Gold Derby’s official frontrunner for Best Picture based upon the combination of predictions by our Experts, Editors, Top 24 Users, Top 24 All Stars and all Users.

But hold your horses, Derbyites! “First Man” is tied for first place with “Roma,” if you only weigh the Oscar predictions of our Experts: four votes each, if you only count predictions made since Sept. 1.

Strangely, the tie isn’t broken if you count all votes, even rankings made by our Experts before some of these flicks played at the fests. Total scores are tied at six. Erik Davis (Fandango) and Ed Douglas (Weekend Warrior) pick “First Man,” while Peter Travers (Rolling Stone) and Tariq Khan (Fox TV) opt for “Roma.”

Given the Oscar pedigree of both helmers, their movies were early Oscar faves, but then there were those shockeroo dark horses. Sure, “A Star Is Born” had strong early Oscar buzz, but, come on, let’s be honest: weren’t you skeptical? The last two versions of the Hollywood fable (1954 classic with Judy Garland and the 1976 re-do with Babs) were flops with Oscar voters and this one seemed destined for auto-ridicule because it’s toplined by glitter queen Lady Gaga. But let’s not forget that so many Oscar-watchers under-estimated Her Diva-ness when she took the stage at the 2015 awardscast and wowed us with that “Sound of Music” medley. Now, based upon her new movie’s score at Rotten Tomatoes (90!), she and Bradley Cooper may take that stage again.

An unforeseen breakout hit at Telluride turned out to be a film that may land in the Best Picture race, but it’s clearly one that threatens to become a winner for Best Actress: “Can You Ever Forgive Me?” If the movie takes that category, its title might echo the words Melissa McCarthy will inevitably have to utter to current frontrunner Glenn Close (“The Wife”), who will end up setting a new record for the most losses among actresses in academy history (seven).