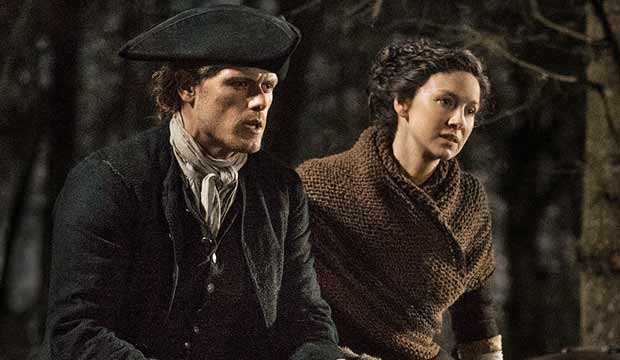 “I feel so lucky,” tweeted Sam Heughan upon the renewal of “Outlander” on Starz. “Thank you to [author Diana Gabaldon] and our great fans for supporting us on this memorable and life changing journey. So thrilled to play this character for two more! Big thank you to the cast, crew and of course, the sublime Claire herself.” This week it was announced that “Outlander” would be returning for season four this fall, but that’s not all. It will also be back for seasons five and six in the coming years. Are you excited to get your guaranteed “Outlander” fix for the foreseeable future? Scroll down to the bottom of this post to see the grateful reactions of both Heughan and his co-star Caitriona Balfe.

“Outlander” is based on the romantic fantasy novels by Gabaldon and developed for television by Ronald D. Moore, who was previously known for his work on the “Star Trek” series “The Next Generation,” “Deep Space Nine” and “Voyager.” Then Moore racked up critical plaudits and a Peabody Award for his reimagining of “Battlestar Galactica” on Syfy.

Over the course of its first three seasons “Outlander” has earned five Golden Globe nominations, including Best Drama Series in 2016. It also won a Critics’ Choice Award in 2014 for Most Exciting New Series, and it was voted Most Bingeworthy Show at those awards twice. It has been the recipient of three Emmy nominations for its music composition (2015), costumes (2016) and production design (2016). And let’s not forget that Heughan was awarded Best Drama Actor in 2015 at our very own Gold Derby TV Awards.

Check out Heughan and Balfe’s tweets below.

I feel so lucky.
Thank you to @Writer_DG and our great fans for supporting us on this memorable and life changing journey.
So thrilled be play this character for two more!
Big thank you to the cast, crew etc etc and of course, the sublime Claire herself @caitrionabalfe ! … https://t.co/WWCFMNxhNE