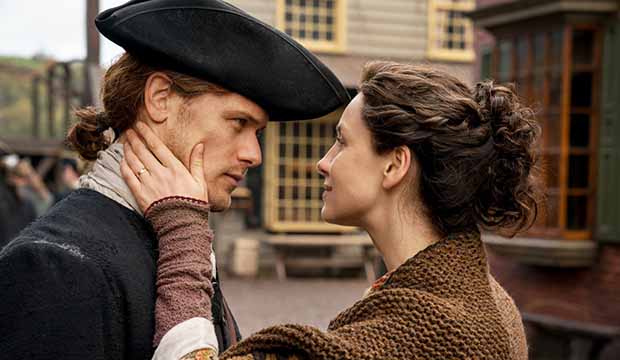 Season 4 of “Outlander” starts on Starz on November 4 with the aptly titled episode “America the Beautiful.”  In the premiere, we find the recently reunited Jamie (Sam Heughan) and Claire (Caitriona Balfe) looking forward to beginning a new life in the colonies, seemingly free of their troubles in Scotland, after having been shipwrecked off the Georgia coast in 1766.

Sam and Claire set up temporary home in the pre-Revolutionary War colony of North Carolina. While they profess loyalty to the British rulers, Claire is aware of the impending conflict to come with the colonists. To that end, she tries to guide Jamie in the choices that he is making. As the season progresses, the Frasers find themselves in league with Stephen Bonnet (Ed Speleers), a vagabond pirate and smuggler.

Two centuries later, their daughter Brianna (Sophie Skelton) is growing up without her parents in the 1970s. She soon reconciles with Roger Wakefield (Richard Rankin), the historian who worked with Claire to find out what had happened to Jamie. Roger continues his search to see if the pair of star-crossed lovers found each other. When he learns of their impending peril, he and Brianna travel back in time, thereby allowing father and daughter to finally meet.

This season of the hit drama series is based on “Drums of Autumn,” the fourth of eight books in the best-selling book series by Diana Gabaldon. Balfe, Heughan and the rest of the “Outlander” cast spent a year filming season 4 in Scotland and then various locales in eastern Europe, which stand in for the mountains and rivers of the American colonies.

With the season 3 finale of “Outlander” airing in December 2017, the Droughtlander till season 4 lasted almost a year. While it has been agonizing, we are thankful that the accelerated production schedule cut five months off the nearly year-and-a-half gap between seasons 2 and 3.

Are you excited for the new season of “Outlander” to finally debut? How do you think the show will do at the Golden Globes? And are you still mad that it was all but shut out of the Emmys? Be sure to sound off down below in the comments section.