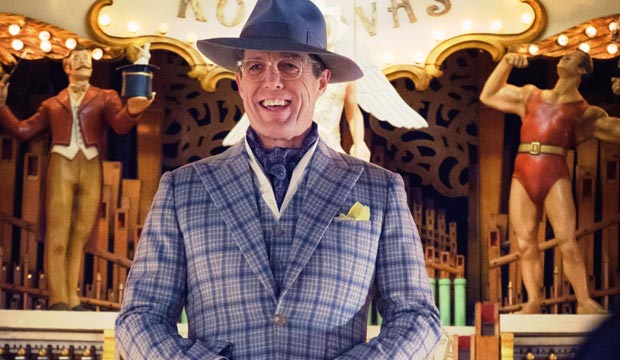 The family comedy set a record at Rotten Tomatoes with 100% positive reviews (all 214 of them). Even Alfonso Cuaron’s lauded “Roma” didn’t manage 100% fresh, receiving one negative review. It has even received the Guillermo del Toro (and he knows a lot about creatures) stamp of approval on Twitter: “One of the best films of the year (no kidding) and one of the best sequels ever.”

“Paddington 2” was nominated for three BAFTA Awards including Best British Film and supporting actor for Hugh Grant. It made $227 million worldwide; $40 million in the U.S. Let’s face it “Paddington 2” is the “Citizen Kane” of adorable bear movies. It has heart, soul, humor and pathos. So, attention must be paid.

I really didn’t know that much about “Paddington” when I was assigned a story when I was the Los Angeles Times on the 2015 hit film, which also earned BAFTA noms and scored 98% fresh on Rotten Tomatoes.

But I was immediately smitten with young bear from Peru who finds himself at London’s Paddington station. Created  six decades ago by Michael Bond, there had been adaptations of the tale of the bear who keeps his marmalade sandwiches in his rather scruffy hat, but the 2015 film marked the first in CGI.

In the film, Paddington find himself “adopted” by the London Brown family after they find him at Paddington station wearing a tag that says, “please look after this bear.” “Paddington” was perfectly cast with Hugh Bonneville from “Downton Abby” as the patriarch, Oscar nominees Sally Hawkins as his wife and Julie Walters as their eccentric housekeeper, and Oscar-winner Nicole Kidman as Paddington’s nemesis.

Beautifully adapted and directed by Paul King (unfortunately, no relation), Paddington was brought to believable life on screen thanks to the cutting-edge effects company Framestore’s gorgeous rendering of the bear and the voice of Ben Whishaw as the sweet, innocent Paddington. (Ironically, Colin Firth was the first actor chosen to be the voice of Paddington; he now plays Whishaw’s nemesis in “Mary Poppins Returns”).

King and producer David Heyman of the “Harry Potter” franchise told me they wanted to do a film that stood out from that feature talking animals. “I always thought the label-look after this bear-is emblematic of what really works about him,” King said. “He is an outsider in the world.” The little bear’s emotional plight also touches on universal themes: “We want to find a home and acceptance. We want to feel love. I felt that worked on a personal level. It felt like a warm and positive theme.”

And that theme delivers ten-fold with “Paddington 2,” especially with the rise of prejudice against immigrants over the world. Let’s face it, if Paddington arrived at Penn Station or Union Station, he would be incarcerated or sent packing back to Peru.

As “Paddington 2” opens, the little bear, who has been described as Buster Keaton with fur, has settled in nicely with the Browns and is popular with his neighbors in his community. Because it’s beloved Aunt Lucy’s upcoming 100thbirthday, he performs odd jobs around the neighborhood to earn money to buy a pop-up book at an antique book shop for her. When the book is stolen, Paddington ends up being framed by the egotistical neighbor Phoenix Buchanan (a marvelous Hugh Grant) and sent to prison.

SEE Hugh Grant movies: 15 greatest films, ranked worst to best, include ‘About a Boy,’ ‘Four Weddings and a Funeral,’ ‘Paddington 2’

Just as with “Paddington,” King has made a family film that kids will enjoy on one level and will make adults’ tear ducts overflow-especially the reunion between Paddington and his Aunt Lucy. Besides Grant’s delicious turn as the villain, Brendan Gleeson is a hoot as the bad-tempered prison cook Knuckles who turns into a pussycat when he tastes Paddington’s marmalade sandwich recipe. Just as with the first film, Gary Williamson’s production design is wonderfully eccentric, and quirky — I’d love to live in the Brown house — and his design of the carnival the Browns attend is especially magical.

In his review for the Los Angeles Times, critic Justin Chang called it a “beautifully structured comedy of the old school, full of inspired blink-and-you-miss-it wordplay, intricate gags that build on each other, and narrative digressions that pay off in ways that feel inspired rather than predictable. It’s an exquisite reminder of the wondrous things that can happen when a storyteller of boundless imagination avails himself of some rigorous discipline.”

So, here’s a reminder to embrace your inner child and lavish “Paddington 2” with the kudos it so richly deserves.