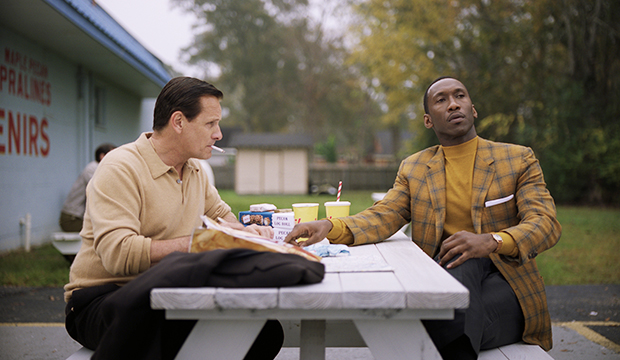 Talk about opposites attracting. Viggo Mortensen’s resume tends toward brooding, often romantic heroes like his warrior Aragorn in “The Lord of the Rings” trilogy.” Peter Farrelly  along with brother Bobby, stooped to new hilarious lows in a string of R-rated ‘90s comedies such as “Dumb and Dumber” and “There’s Something About Mary.” However,  filmmaker and leading man have found common ground in the crowd-pleasing sensation, “Green Book.”  After winning the prestigious People’s Choice Award at the Toronto International Film Festival, the pair headed to The Middleburg Film Festival, where they won a similar honor. Given that  the picturesque burg is close to from Washington, D.C.,  it is not unusual to see the likes of Lynda Bird Johnson Robb, daughter of LBJ, and husband and ex-Virginia governor Chuck Robb waiting in line to see the most-anticipated title of this year’s line-up.

Apparently, demand is high all over, as Universal Pictures decided to open “Green Book” in limited release in 20 cities on November 16 while opening wide on the day before Thanksgiving. In preparation, here are seven facts you should know before seeing this true story of polished black pianist Don Shirley (Oscar winner Mahershala Ali of “Moonlight”) who hires uncouth  Italian-American brute Tony Lip (Mortensen) as a chauffeur and bodyguard as they head to concert dates in the segregated  South of 1962.

*What started as a small-budget picture with an estimated budget of $28.9 million was picked up by Universal Pictures after Steven Spielberg gave it his stamp of approval.

Says Mortensen,” It was essentially a pretty good, well-budgeted independent movie. That is how this whole thing started. It was kind of how it was made. But after Universal saw the movie, though, they said, ‘We want this.’” Adds Farrelly, “We actually lobbied. My agent, Richard Lovett, represents Spielberg. I kept calling Richard, telling him, ‘You’ve got to show this film to Spielberg.’ He called Spielberg and said, “Watch this movie.” Spielberg watched  it at home alone. And he flipped. His quote was, “It’s the best buddy movie I’ve seen since ‘Butch Cassidy and the Sundance Kid.’ Steven got the wheels rolling and big Universal took it away from little brother Focus, which didn’t really know what to do with it.

*What does “Green Book” have in common with “There’s Something About Mary”? It is counting on word of mouth to spread the message to the masses.

You might think that “Mary,” which famously featured Cameron Diaz confusing Ben Stiller’s manly fluids for hair gel, was a hit from the get-go.  But Farrelly dispels that notion. “That movie didn’t open, you know. It was fifth the first week. It did $13 million in the middle of the summer. It was a disappointment. But it just wouldn’t go away. The next week it made $11 million, and then $12  million and it kept going and going. I remember it became No. 1 in its eighth week for the first time. It was over Labor Day weekend. Finally, after two months, I realized this is a huge hit.“ Mortensen says, “I am hoping that happens for us. I know the business is different now. But I think our movie will be a word of mouth movie. I think it is a story, whether you live in Texas or Alabama or wherever, you are going to hear about a film that is very entertaining and is a great buddy story.

*Mortensen became a bigger star already because of “Green Book” — by pulling a De Niro and packing on 45 pounds.

Since Tony Lipp can’t resist chowing down on such Southern delicacies as fried chicken, Mortensen – whose standard physique is lean and mean — ended up  putting on 45 pounds by the end of the shoot. Says Farrelly, “He gained 25 initially for the role because Tony Lip is supposed to be a bouncer, a burly guy. Plus, Viggo was pounding weights. You bulked up. He was up 25 when we started, but he kept eating and eating.” Blame the cuisine of New Orleans, where most of the film was shot. As Mortensen says, “It was a lot of fun putting it on, but less fun taking it off.”

SEE3 more things you should know before you see ‘Green Room’