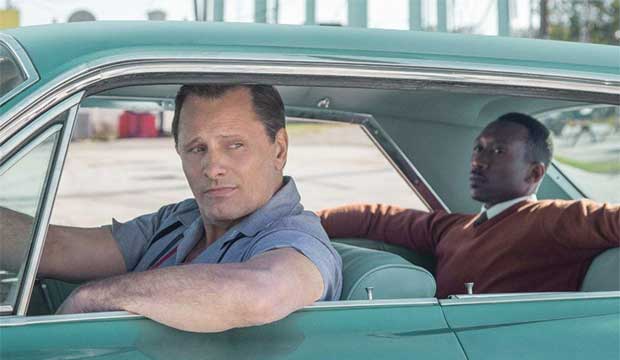 To further prepare to see “Green Book,” the breakout hit from this year’s Toronto International Film Festival based on a true story about a big Italian lug and a cultured black pianist who bond while touring in the segregated South in 1962, here are three more inside facts about the film directed by Peter Farrelly that will open in 20 cities on November 16 and goes wide November 21.

*Leading-man Viggo Mortensen, whose background is Danish-American, initially didn’t think he was right to play a Bronx guy who could be at home in Martin Scorsese’s “Goodfellas.”

“I love Joe Pesci and I admire those guys. So much so that, when Pete offered me the role, I said, ‘Um, I don’t know. You are already taking a hard right by doing this change of pace with this kind of story.  Which is all right, it’s a beautiful script.  But don’t make it even messier by casting me in that part. I’m not right for it.’ But he made his argument and convinced me.” Farrelly was a Viggo booster from way back. “I noticed him in ‘Witness,’ ” the actor’s 1985 film debut. “He just stuck out.  I remember thinking, ‘That’s an Amish guy they must have cast because he just looked right.’ But then  the thing that really got me was “The History of Violence” and “Eastern Promises” – that locker room  fight scene? Unbelievable. That is one the great scenes of all time.”

*While his star has been Oscar-nominated previously as a lead actor in 2007’s “Eastern Promises” and 2016’s “Captain Fantastic” and stumped for “The Lord of the Rings” trilogy, “Green Room”  is Farrelly’s first brush with awards-season campaigning.

In fact, his only trophy win was a Razzie. Farrelly maintains, however, it was not justified.  “It was this film from 2013, ‘Movie 43,’ and it was with 15 different directors. By the way, the guy (James Gunn) who worked on that did ‘The Guardians of the Galaxy.’ He was one. There were some great directors in there, but there were some really bad ones. Mine, I will show you the shorts. I stand by them. I loved what I did. But I got a Razzie for that.”

*The Toronto International Film Festival, which Mortensen has regularly attended over the years, was Farrelly’s first-ever such event as a participant touting a movie.

“It was cool to be in Toronto ,” the actor recalls. “The screening blew our minds. It was the first audience to see it. A long standing ovation up in the rafters. He says a few things, people laugh. Then he says, ‘This is my first film festival.’ Everyone laughs. He says, ‘I’m serious. I’ve been to film festivals to watch movies but we never were in them.’ “Adds Farrelly, “We did Zurich, Mill Valley, New Orleans.  We’ve been getting around now. I wasn’t part of this world. I knew there were film festivals, but I had no idea there was one every day. Constantly.” Mortensen: ” ‘Dumb and Dumber To’ was supposed to go to Cannes.” Really? Peter: “No.”

SEE3 more things to know before you see ‘Green Book’