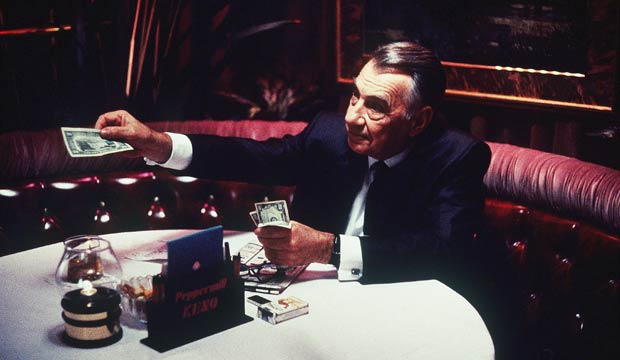 With eight Oscar nominations to his name Paul Thomas Anderson is one of the most celebrated filmmakers currently working. However, he has yet to actually win one of those little golden statues. He earned his latest pair of bids this year for Best Picture and Best Director for the romantic drama “Phantom Thread.” Will it finally be his ticket to victory? And how does it compare to the rest of his filmography? Tour through our photo gallery above of all eight of Anderson’s films ranked from worst to best.

Anderson made his feature directing debut with “Hard Eight” (1996), made when he was just 26-years-old. He earned his first Oscar nomination the very next year: Best Original Screenplay for “Boogie Nights” (1997). Another Best Original Screenplay bid followed just two years after that for “Magnolia” (1999). Then he hit the Oscar jackpot with Best Picture, Best Director, and Best Adapted Screenplay nominations for “There Will Be Blood” (2007) — well, almost hit the jackpot as none of those noms resulted in a win. It took another seven years for him to return to the Best Adapted Screenplay race for “Inherent Vice” (2014). Now he has two more bids for “Phantom Thread,” but he’s not predicted to win either according to our latest racetrack odds, so we’ve got to ask, what exactly will it take for Anderson to finally win one of these?

In honor of his latest achievement, take a look through our gallery of Anderson’s greatest films, including a couple for which he didn’t receive Oscar nominations.

8. “Hard Eight” (1996)
Anderson burst onto the scene at the tender age of 26 with this neo-noir about a professional gambler (Philip Baker Hall) who takes a young man (John C. Reilly) under his wing and teaches him the tricks of the trade. But things get complicated when his protege starts dating a casino waitress/prostitute (Gwyneth Paltrow) and falls in with an ominous stranger (Samuel L. Jackson). Considering the grand ambition of his subsequent works, this is a fairly low-key debut. Yet the film is notable for Hall’s powerhouse performance and Robert Elswit’s flashy camerawork, signaling the immense skill Anderson would display throughout his career.

7. “Inherent Vice” (2014)
Given its dense, convoluted source material, it’s a wonder Anderson was able to make any kind of movie out of “Inherent Vice,” let alone a semi-coherent one. Thomas Pynchon’s whacked-out, drug-fueled mystery-comedy follows a private detective (Joaquin Phoenix) investigating the disappearance of a former girlfriend (Katherine Waterston) in 1970s Los Angeles. Along the way he meets a variety of oddballs, including a straight-laced cop (Josh Brolin) and a coke-addicted dentist (Martin Short). The film isn’t everybody’s cup of tea (or ounce of ganja), but those willing to go along with its wandering narrative will surely enjoy the ride. Count the Writer’s Branch of the Academy amongst its fans: “Inherent Vice” brought Anderson an Oscar nomination for Best Adapted Screenplay, which he lost to Graham Moore (“The Imitation Game”).

6. “The Master” (2012)
Watching “The Master” is like putting together a puzzle with some of the pieces missing. Still, the performances by Joaquin Phoenix, Philip Seymour Hoffman, and Amy Adams are mesmerizing, and Anderson creates a film that is often bewitching while still being maddeningly opaque. Loosely inspired by the origins of Scientology, the story centers on an alcoholic sailor (Phoenix) home from WWII who falls under the spell of a magnetic, L. Ron Hubbard-esque faith leader (Hoffman). Adams costars as the master’s wife, who suspects this new member isn’t right for the cause. Anderson asks big questions on a large canvas (it was shot in 65mm by Mihai Malaimare Jr.), yet provides few answers, making for a beautifully crafted, oddly enigmatic movie that continues to perplex on subsequent viewings. Phoenix, Hoffman, and Adams reaped Oscar nominations for Best Actor, Best Supporting Actor, and Best Supporting Actress, respectively, yet Anderson was snubbed in Best Original Screenplay despite competing at the WGA.

5. “Punch-Drunk Love” (2002)
On paper, the combination of Anderson, the arthouse auteur behind “Boogie Nights” (1997) and “Magnolia” (1999), and Adam Sandler, the clown prince headliner of “Billy Madison” (1995) and “Happy Gilmore” (1996), seems like an odd paring. Yet together they create a quirky, tender, and colorful romantic comedy that speaks to the loner inside all of us. Sandler plays Barry Eagan, an angry and isolated novelty salesman who falls in love with an English woman (Emily Watson) while being extorted by a phone-sex line run by a shady mattress salesman (Philip Seymour Hoffman) and collecting frequent flier miles through pudding purchases. Anderson shows us something deeper in the Sandler screen persona, adding a hidden pain and heartache to the rage and hostility that animates his sophomoric comedies. Sandler was rewarded for stepping outside of his comfort zone with a Golden Globe nomination for Best Film Comedy/Musical Actor.

SEE Oscars 2018: ‘Phantom Thread’ would be the most contemporary film in 23 to win Best Costume Design

4. “Phantom Thread” (2017)
A sort of “Fifty Shades of Grey” for the arthouse crowd, “Phantom Thread” centers on a London fashion designer (Daniel Day-Lewis) in the 1950s whose fastidious life is interrupted by the arrival of a bewitching young woman (Vicky Krieps). Like the dressmaker at its center, Anderson weaves a spellbinding tapestry exploring the kinky ties that bind love and obsession. Day-Lewis is magnetic in his (supposedly) final performance, as are Krieps as the object of his desire and Lesley Manville as his possessive sister. Jonny Greenwood’s haunting score beautifully compliment Anderson’s stunning visuals, shot by the director himself. The Academy rewarded the film with nominations for Best Picture, Best Director, Best Actor (Day-Lewis), Best Supporting Actress (Manville), Best Costume Design, and Best Score.

3. “Magnolia” (1999)
How to describe “Magnolia”? A three-hour epic about the interlocking lives of several Southern Californians dealing with love, death, and raining frogs, the film is intimate, sprawling, angry and hilarious all at once. There’s too many standout performances to list in one paragraph – do you single out Tom Cruise’s Oscar-nominated turn as a bitter motivational speaker whose TV-producer father (Jason Robards) is dying of cancer? Or Julianne Moore as the dying man’s second wife who confesses to his live-in nurse (Philip Seymour Hoffman) that she only married him for the money? Or how about Philip Baker Hall as an ailing game show host whose daughter (Melora Walters) is slowly killing herself through drug abuse? Or John C. Reilly as the shy police officer who falls head-over-heels in love with her? And let’s not forget William H. Macy as a former quiz show whiz-kid desperate for money to buy braces for his teeth to impress the handsome bartender. Complimented by Aimee Mann’s original songs (including the Oscar-nominated “Save Me”), “Magnolia” is a mesmerizing mosaic of pain and hope that isn’t easily forgotten. Anderson competed in Best Original Screenplay for the film, losing to Alan Ball (“American Beauty”).

2. “There Will Be Blood” (2007)
With “There Will Be Blood,” Anderson displays the kind of ambition that created such masterpieces as “Citizen Kane” (1941), “Lawrence of Arabia” (1962), and “The Godfather” (1972). It’s a great American epic, a classic tale of how greed, egomania, and madness will topple the mightiest of men. Daniel Day-Lewis gives the performance of a lifetime (and has an Oscar to prove it) as Daniel Plainview, a turn-of-the-century prospector who strikes it rich after striking oil, only to end up as isolated and embittered as Charles Foster Kane. Paul Dano costars as a self-enriching preacher whom Plainview smites from the Earth with a bowling pin. Robert Elswit’s Oscar-winning cinematography and Jonny Greenwood’s moody score create a constant sense of dread, a feeling that the landscape will swallow us whole if we don’t leave it be. It takes a certain level of insanity to make a film like “There Will Be Blood,” and the world of film is richer for Anderson’s mania. The Academy rewarded him with nominations for Best Picture, Best Director, and Best Adapted Screenplay, all of which he lost to Joel and Ethan Coen (“No Country for Old Men”).

1. “Boogie Nights” (1997)
Twenty years after its release, “Boogie Nights” remains the crown jewel in Anderson’s crown. A gloriously entertaining story about the ins-and-outs of the porn industry in 1970s California, the film shows the then 27-year-old displaying the confidence and talent of a director twice his age. It’s a classic Hollywood story about a young man (Mark Wahlberg) with the skills (and equipment) to make it in the biz, but whose ego almost destroys him. There are many things that make “Boogie Nights” so re-watchable, from Robert Elswit’s showy cinematography to Anderson’s quotable dialogue to the groovy soundtrack. Yet what makes us return to it over and over again is its love of people. Its wide cast of oddball loners – including Burt Reynolds as the auteurist director, Julianne Moore as the den-mother leading lady, and Heather Graham as the arrested adolescent Roller Girl – came together to form a surrogate family when their real ones turned their backs on them. It’s a message of humanism that transcends the seediness and titillation of the storyline and elevates the film into the stratosphere. Anderson received his first Oscar nomination for the film in the Best Original Screenplay category, which he lost to Ben Affleck and Matt Damon (“Good Will Hunting”).