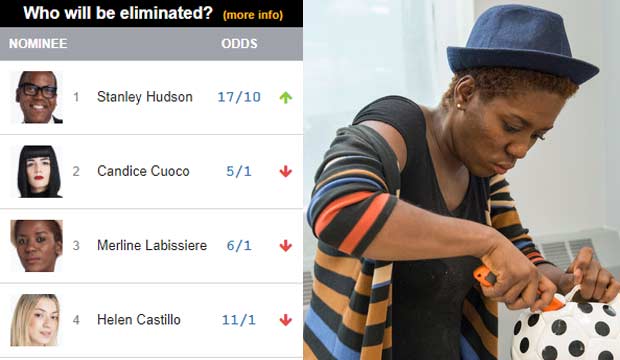 Is Merline Labissiere at risk of elimination in episode four of “Project Runway All Stars” tonight? This time last week we thought she was the front-runner to win the whole competition, but after struggling in the episode three challenge, “Perfect Pairings,” are readers aren’t so sure she’ll even stick around.

Every week we poll “Project Runway” fans to find out who they think will win season six of this design show spin-off, who will win the design challenge, and who will be eliminated. But according those combined predictions, it’s actually Stanley Hudson who is the likeliest to be eliminated from the competition. He gets leading odds of 17/10, which translates to a 36.75% chance of going home.

This is actually the third week in a row we’ve predicted him to be sent home. In episode two, “Damsels in Distress,” he did come close to elimination. He landed in the judges’ bottom two when designing post-apocalyptic fashion and narrowly escaped an apocalypse of his own. However, when he teamed up with Char Glover for “Perfect Pairings” they both sailed safely through to the next round. That said, Hudson has had one low score without any high scores from the judges thus far, so if he disappoints them again he may not get another chance.

Candice Cuoco ranks second in our predictions with 5/1 odds, or a 16.33% chance of elimination. After advancing safely through the first two weeks of competition she barely survived being partnered with Labissiere for the “Perfect Pairings” challenge. They were one of the bottom two pairs, but the judges decided to send home Melissa Fleis and Ari South instead in a double elimination.

Labissiere is close behind with 6/1 odds, or a 14.25% chance of elimination. Perhaps our users think she’ll get slightly more leeway from the judges after winning the first design challenge of the season and getting one of the high scores in “Damsels.” But if she lets the judges down again she could just as easily be sent back to the workroom to pack her things and leave.

Who do you think will be out tonight? Click on the graphs below to see more detailed prediction stats for tonight’s new episode. 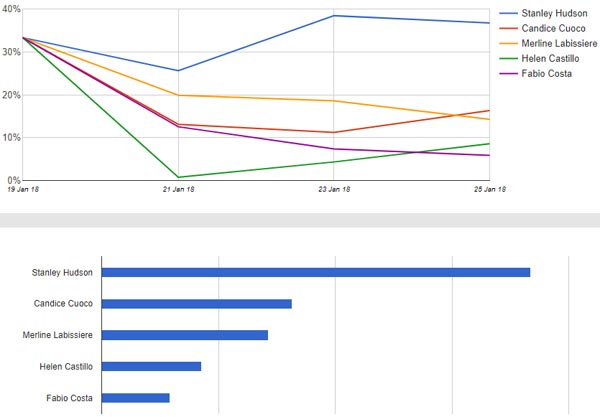