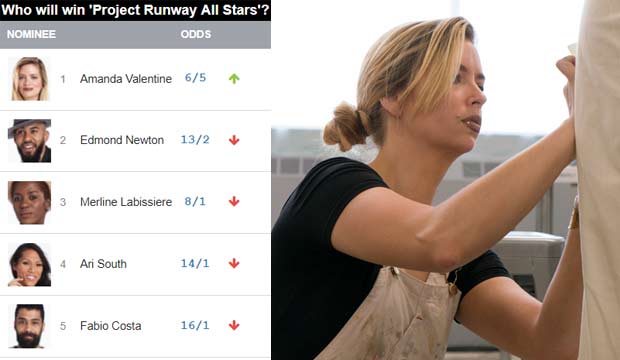 “Project Runway All Stars” season six got underway last week, pitting a group of eight “All Stars” rookies against eight “All Stars” veterans. You might think the veterans would have the advantage since they’ve competed on “All Stars” before, but it was the rookies who got off to a stronger start, winning the team challenge that started the season. And one of those rookies, Amanda Valentine, increases her lead in our predictions for who will win.

As of this writing Valentine leads with 6/5 odds, which translates to a 45.09% chance of winning the season. That’s up from last week when she led with 19/10 odds, or a 34.43% chance of prevailing. She proved her mettle in week one by helping her team win the challenge, but she wasn’t actually the winning designer on her team, or even the runner-up. Instead, the judges chose her rookie teammate Merline Labissiere as the challenge winner. As a result Labissiere got a big boost. She now has 8/1 odds (11% chance of winning), up from 40/1 odds (2.36% chance of winning). That’s good enough to place her third in our predictions right behind Edmond Newton, who holds steady with 13/2 odds (12.94% chance of winning). That means the top three slots in our forecasts are occupied by the rookies. It looks like the veterans will need to step up their game quickly to keep up.

One vet came out of the season premiere episode in a strong position: Ari South. She previously finished third in season eight of the original series, but had a disappointing 11th place finish in “All Stars” season three where she was the first to go. Not so this time around. Even though her team of veterans lost the design challenge, the judges made special mention of how good her design was. Now she ranks fourth with 14/1 odds (6.91% chance of winning), which is way up from last week when she wasn’t even on the radar, getting 100/1 odds (0.16% chance of winning). Do you agree that she’s the best hope for the veterans this season?

Check out the graphs below to see how the momentum has changed in the first two weeks of the competition. Click on it to see more detailed stats for tonight’s episode. 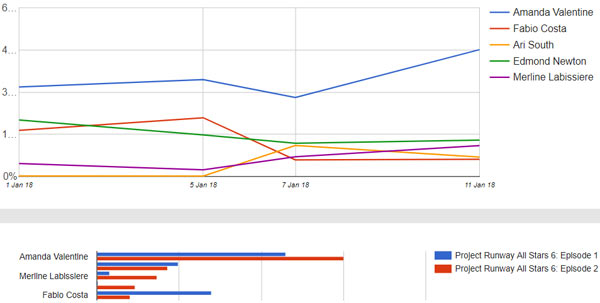