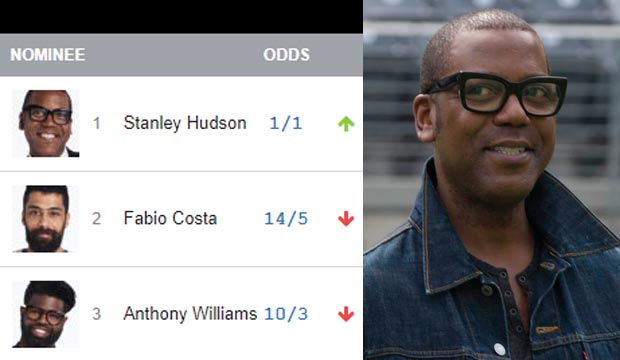 Season six of “Project Runway All Stars” has been tough to predict with many surprise eliminations and challenge wins along the way. So it’s true to form that the April 5 season finale episode is also a close call. The finalists are Fabio Costa, Stanley Hudson and Anthony Williams. So who will prevail?

As of this writing Hudson has the advantage with leading odds of 1/1 based on the combined forecasts of the Gold Derby users who have entered their predictions in our predictions center. But that’s not an overwhelming lead. In fact, it means the chances of him winning are about 50/50. After that our users think Costa will finish second (5/6 odds) and Williams will place third (2/3 odds).

Hudson won three design challenges over the course of the season, more than any other designer, and when he showed the judges a preview of his final six-piece collection in last week’s penultimate episode, “History in the Making,” they loved it. So there’s good reason to believe he’ll come out on top in the finale, but he has only competed on “Runway” once before, in season 11 of the original series, while both Costa and Williams are “All Stars” veterans.

And Costa has arguably the strongest track record among the finalists. In his previous seasons his best showing was second place (season 10 of the original series), while Hudson previously finished third and Williams’s highest placement was fifth (season seven of the original series). Costa also has a unique, immediately recognizable design aesthetic that the judges have appreciated throughout this season of “All Stars.” He has only landed among the bottom three designers in one design challenge, fewer than Hudson (two low scores) and Williams (three low scores).

Do you agree with our predictions that Hudson will take the “Project Runway All Stars” title? Or is it too close to call?

'Project Runway All Stars' twist: What did you think of the surprise elimination decision right before…

'Project Runway All Stars' recap: Who advanced to the finale after Anne Fulenwider judged 'Modern…

'Project Runway All Stars' fans are pretty sure Irina Shabayeva WILL win, but they're not so sure she…

'Project Runway All Stars' elimination predictions: Michelle may miss out on a spot in the…

Anthony Ryan Auld was eliminated from 'Project Runway All Stars,' and I am NOT here for it…

Worst elimination of the season? 'Project Runway All Stars' fans say judges got it wrong by axing…