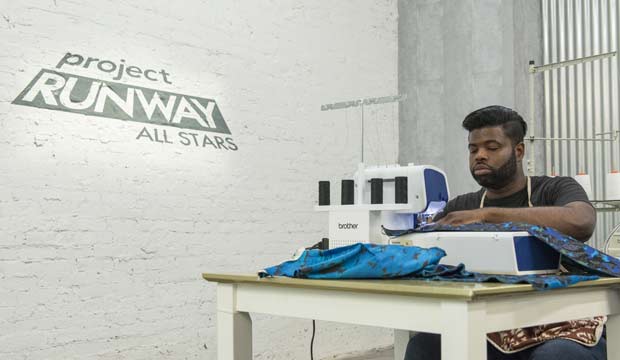 After three months of competition, “Project Runway All Stars” season six ended on Thursday night, April 5, with its season finale episode “Making Fashion History.” The episode concluded a two-part challenge in which the designers were tasked with creating six-piece collections inspired by American history. So who prevailed? Scroll down for our complete minute-by-minute live blog with all the latest developments as they happen.

Last week, in “History in the Making,” Ken Laurence was eliminated before getting a chance to show his collection and compete for the title, leaving Fabio Costa, Stanley Hudson and Anthony Williams in contention to win. That was after the four competitors showed a preview look from their collections to the judges. But since the judges already saw one look, the remaining three had to design more piece, for a total of seven each.

SEE ‘Project Runway All Stars’ Winners Full List: Photos and Where Are They Now Updates

And “All Stars” brought out the big guns for the final judges’ panel. In addition to host Alyssa Milano and regular judges Isaac Mizrahi and Georgina Chapman critiquing the designs, the finale brought on fashion designer Zac Posen and Oscar winner Catherine Zeta-Jones as guests. Posen is a judge on the original “Project Runway” series and recently guest-judged his own design challenge this season on “All Stars,” “Posen on the Red Carpet.”

Hudson won the “Red Carpet” challenge, so did Posen give him high marks again? That’s what our users thought going into the finale. Hudson led our racetrack odds, with Costa expected to finished second and Williams predicted for third place. Did those forecasts come true? Find out below. (All times listed are Eastern.)

9:00pm — The finale begins! I’m predicting Fabio will win because he has the most distinctive, idiosyncratic style, but none of the three would surprise me.

9:03pm — I’m really excited to see previous contestants return to the show as helpers for the finalists. Candice Cuoco is helping Anthony, Amanda Valentine is assisting Stanley, and Helen Castillo is teamed up with Fabio. I’m especially glad to see Amanda back in the competition, even though it won’t be her collection in the runway … not that I’m bitter.

9:04pm — Stanley is thrilled to have Amanda as a helper, Fabio trusts Helen completely, and Candice is thrilled with Anthony’s collection idea, so it sounds like kismet.

9:05pm — Stanley was disappointed with how his collection went over in his original competition, season 11 of the original series, so he’s eager for redemption, and the judges have been responding especially well to him — as long as he doesn’t have any rock-and-roll looks in his collection.

9:07pm — Time for the consultations with mentor Anne Fulenwider — shudder! She’s worried that Fabio won’t have enough runway impact, but he seems to be on the right track. She thinks Stanley needs a standout runway moment with more color: “You don’t get points for tasteful, classy and wearable,” she tells him.

9:13pm — Stanley knows how to go bold since he won the avant garde challenge in “A Kick in the Astro,” so he definitely has it in him to push the boundaries. I agree with Anne that I’d rather see bold choice, and up against Fabio and Anthony he’s going to need boldness to stand out, and he’s planning to take her advice and go for drama.

9:16pm — Anne is worried that there isn’t enough color in Anthony’s collection, but he assures her he’s bringing the bright colors — and ostrich feathers. “I am concerned about the busy, craziness of it,” says Anne. Maybe Anthony and Stanley should team up about his collection because Anthony’s boldness and Stanley’s polish might be the a match made in fashion heaven.

9:20pm — Ultimately, Anne thinks Stanley and Fabio need to “amp it up,” while Anthony needs to “rein it in.” I wasn’t a fan of Anne’s consultations earlier in the season since they seemed so unforgiving at first. But as the season went along her guidance has seemed more nuanced and constructive. Or perhaps she’s being edited differently now. With fewer and fewer designers, there’s more time to see consultations without them being reduced to a withering one-liner.

9:22pm — “If I make this dress come to life, I am a bad bitch,” says Anthony about a black velvet number that will be his seventh and final look on the runway. No ostrich feathers on this one.

9:23pm — Anthony is the only finalist who has never designed a full collection on “Runway,” so Amanda and Candice are worried he won’t know how to pace himself to make sure he finished everything. That’s the big question mark of his collection.

9:28pm — I’m worried about Anthony. He seems to be struggling, and his helper Candice thinks so too. But Candice knows he’s capable of pulling off an 11th hour breakthrough.

9:30pm — “I knew I was going to be in the finale,” says Fabio about how determined he was to win this competition, and Stanley is impressed with his work when he watches his progress.

9:33pm — Fabio and Stanley are feeling good about their model-fittings, while Anthony is “nervous” and scrapping his signature look. Now I’m starting to wonder if the show is editing Anthony to seem like he’s in more trouble than he’s really in, and then he’ll turn out to be the runaway winner.

9:36pm — Last day in the workroom! And Anthony is “going as fast as I can.” Fabio still has to “put finishings on everything.” And now Stanley is plagued by a bad, rippling zipper. Maybe he can cover it with one of Anthony’s ostrich feathers — I don’t think he’s using them anymore.

9:41pm — Between the ostrich feathers and paint for an added effect, Anthony decided to go with paint. But I’m really, really morbidly curious about how that feathered look would have turned out.

9:43pm — “Hell yeah, I’m stressed,” says Anthony at the end of the last full day in the workroom. But I’m not as worried about him as I was before. I think he’s collection is going to turn out pretty great.

9:45pm — It’s a big love-fest as the three designers reminisce about their “journey” over wine and cake. I greatly prefer reality shows where people genuinely seem to like each other. Save the drama for the runway!

9:48pm — Anthony’s confidence is definitely back. He feels like he has won already and is just waiting “to be crowned.”

9:49pm — “I wish one of those bitches did something wrong,” says Stanley, admiring his competitors’ work. I’d watch a reality show that’s just Stanley, Fabio and Anthony opening a boutique together.

9:55pm — I saw the looks in the workroom, but I don’t think I’ll know whose collection I really prefer until I see them strut down the runway. Though I did like a lot of what I was seeing especially from Stanley and Fabio.

Stanley’s Collection — I love Stanley’s first look, all white, but bringing the drama. I’m liking a lot of the details in the rest of his collection, but nothing that puts him over the top for me. This collection is worthy of a win, I think, but beatable depending on what the other designers bring to the table.

Fabio’s Collection — I think I preferred the birds in Fabio’s original preview look to the blast of yellow he replaced it with. I’m loving the subtle details in his designs, like the smocking on the back of one jacket. There’s a lot of intricacy that I appreciate, a definite cohesion between all the looks, and great fabic on his last look. For me personally it’s really close between Fabio and Stanley, so we’ll see what Anthony has to offer.

Anthony’s Collection — Wow, Anthony’s second look with a sheer black top and tight white skirt may be the best I’ve seen from any collection — until the rest of his collection came out. There is incredible intricacy and boldness and originality to this collection, and his theme of going from Audrey Hepburn to Rihanna is coming through brilliantly. His seventh and final look is extraordinarily bold and voluminous with stunning fabric. For me, it’s no contest: Anthony has the winning collection, but I have no idea if the judges will agree.

Stanley — “I think you did an amazing job,” says Isaac. “I am mad about that red dress … it’s the sexiest dress we saw all day.” Georgina says “There’s real beauty in your simplicity.” Zac calls the collection, “stunning” and “sophisticated,” and he loves the metal accents. Catherine was “in awe of the first look” and was “wowed by the final look.” Alyssa says, “It’s dramatic without being theatrical.” He was definitely a big hit with the judges.

Fabio — Georgina says, “You stunned me,” and she was surprised to see how good the collection was in ways she didn’t expect. “Your collection is delicate in it’s oddness,” says Isaac, who wanted more aggressive boldness from him. Catherine is “obsessed” with his jumpsuit. Zac is also “all about the jumpsuit … I think you did a beautiful job.” Alyssa said it “feels like something I’ve never seen before … All of your work is so beautiful.” Fabio’s yellow cardigan was especially popular. Another set of rave reviews from the judges. This is going to be close.

Anthony — “You’re such a breath of fresh air,” says Alyssa, who loves the back of Anthony’s little black dress. Georgina though the finale look “was so incredible,” and she appreciates the rock-and-roll feel. Zac “bizarrely loves the nastiness.” Isaac “loves the last dress,” and he loves the print even though Georgina doesn’t love the print. I think Georgina is crazy not to love that fabric. Catherine loves the black dress. The reviews were more mixed than I was expecting. I couldn’t even guess who will win based on those critiques.

10:25pm — The judges don’t think there’s a clear, decisive winner in their deliberations. They think Stanley is “balanced,” “polished” and “mature.” Fabio was “heartfelt” and “innovative with design.” Anthony’s black dress was Alyssa’s favorite look from the whole night and he knows how to “cut loose.”

10:28pm — This will be the rare reality show where no outcome would disappoint me. Anthony had my favorite finale collection, but each collection was worthy, and each designer has had such standout moments throughout the season.

And the winner is … Anthony Williams! I’m thrilled I wasn’t the only one who adored Anthony’s finale collection. It’s remarkable that Anthony won this competition when his previous best finish was fifth place.

10:34pm — They didn’t announce any other result, so it appears that Fabio and Stanley simply tied for the runner-up slot. Can we have a tie-breaker of some kind? I feel so unresolved!