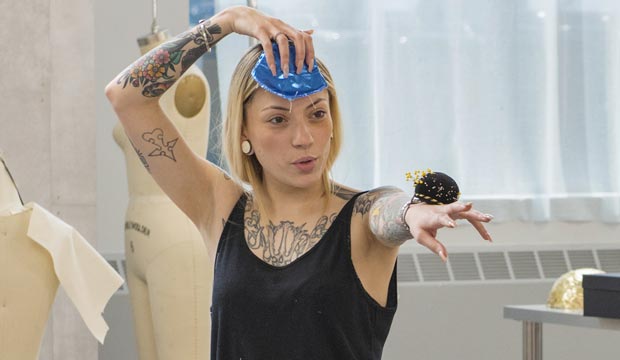 Season six of “Project Runway All Stars” had been a mostly harmonious affair until episode four, “Balls Out,” when the designers had to figure out how to create ball gowns with actual balls in the season’s first unconventional materials challenge. Helen Castillo had one of the lowest scoring designs, but when receiving her critiques from the judges she made comments that seemed to passive-aggressively target her opponents’ looks. That led to an angry confrontation backstage, but was it fair for Castillo to deride her fellow designers or did she cross a line? Vote in our poll at the bottom of this post.

Castillo was throwing shade even while she was working on her design. She made a risky decision to create a new textile for her gown, an ambitious choice given the time constraints, but she felt the extra effort would distinguish her from the rest of the pack. Many other designers took what Castillo considered the easy way out, gluing the ball material to a muslin base. She even called it a “cop-out,” but when a couple of those competing designs turned out to be popular with the judges — including Stanley Hudson‘s, which won the challenge — she defended herself by criticizing the design choices of her competitors.

That didn’t sit well with judge Isaac Mizrahi, who called her out on it. And after the critiques were over Castillo’s fellow designer Fabio Costa told her, “You undermined everyone else to make yourself look better.” Feeling attacked, Castillo stormed out, and when it was time for the judges to render their final verdicts she stayed backstage until reluctantly deciding to join the other contestants to hear the results. Ultimately Candice Cuoco was eliminated for a messy, saggy design while Castillo was in the bottom two but advanced safely to the next round. “I’m sincerely sorry,” she told the other designers she offended. But what do you think? Did she owe them that apology, or was she right about their designs? Vote below.