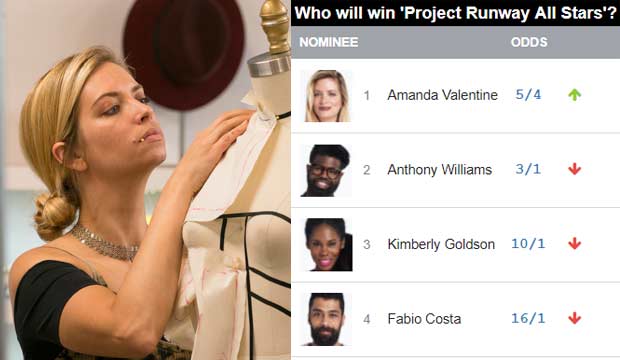 What a difference one week makes. Going into episode three of “Project Runway All Stars” season six, Merline Labissiere was the front-runner to win the competition. But after that challenge, “Perfect Pairings,” ended with her narrowly escaping elimination our users who have entered their picks in our predictions center have had second thoughts.

We poll “Project Runway” fans every week to find out who has the advantage to win, and who’s at risk of going home. Those predictions are combined to generate our official racetrack odds, and on the eve of episode four Amanda Valentine has reclaimed the lead with 5/4 odds. That translates to a 44.5% chance of prevailing. But so far she’s flown under the radar. After three weeks of competition she and Joshua McKinley are the only two remaining designers who haven’t received a high score or a low score from the judges. They have been good enough to advance safely through the competition each week, but also haven’t been singled out for special praise.

But Anthony Williams has excelled for the last two weeks in a row, winning the episode two challenge, “Damsels in Distress,” and then getting another high score in “Perfect Pairings.” As a result he’s also gotten the attention of our users, skyrocketing to second place in our predictions with 3/1 odds, or a 24.21% chance of winning. Compare that to last week when he was in 11th place with 100/1 odds, or a 0.25% chance of winning. But Labissiere also had two high-scoring weeks in a row before she was nearly eliminated last week, so he’d better not take anything for granted.

Check out the graphs below to see how the momentum has shifted throughout the season so far. Click on them for more detailed prediction stats for Thursday night’s show. 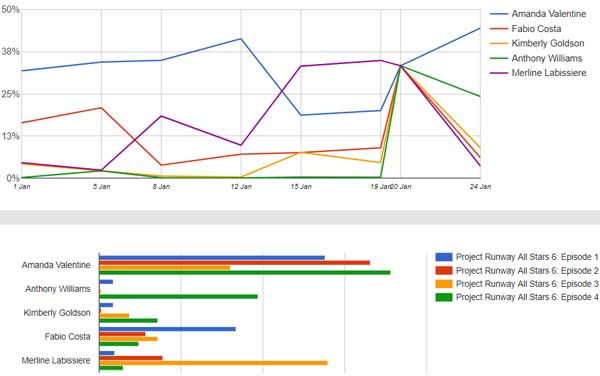