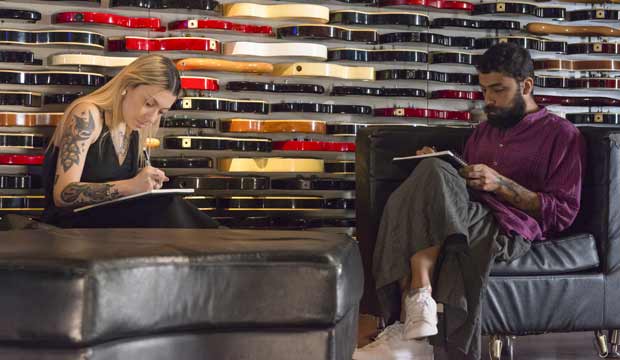 Season six of “Project Runway All Stars” is nearing the home stretch. The series entered episode 10, “Rock Your Face Off,” with its final six designers: Helen Castillo, Fabio Costa, Stanley Hudson, Ken Laurence, Edmond Newton and Anthony Williams. So who rocked on to the top five, and who had to face the music? Scroll down for our live blog with minute-by-minute updates of all the episode’s developments.

“Rock Your Face Off” challenged the designers to create performance looks fit for a music superstar. So where “Posen on the Red Carpet” last week demanded Oscar-caliber chic, this challenge required edgy Grammy glam. It’s too bad Lady Gaga wasn’t present as a guest judge given her history of wearing famously provocative dresses made of meat and Kermit the Frog dolls — though in that case she might be a better fit for an unconventional materials challenge. Instead the designers were judges by special guest Olivia Culpo, who won Miss Universe in 2012 representing the United States, along with the show’s usual panelists Georgina Chapman, Isaac Mizrahi and host Alyssa Milano.

Joshua McKinley was eliminated in “Posen,” sparing the other two low-scoring designers last week, Laurence and Newton. That means they especially had something to prove to the judges this week — especially Newton who had gotten low scores in four of the five previous challenges. But according to the combined predictions of Gold Derby users who have entered their picks for this week’s “Runway,” Laurence was the likeliest to be sent packing with 6/5 odds. Were we right, or did he live to design another day? Find out below. (All times listed are Eastern.)

9:05pm — Anthony drew pop music for his inspiration. Helen gets country music (“It’s going to be a tough one,” she says). Stanley gets rock. Ken also gets pop. Fabio gets country (but he wanted rock, he definitely wasn’t happy with country). And Edmond picked up rock as well. It turns out the designers will face-off head-to-head. There will be one high score and one low score per genre.

9:05pm — Anthony thinks he and Stanley are on a level playing field since neither of them know performance costumes very well.

9:07pm — Stanley says “It’s going to be tough” to go up against Edmond in their face-off, but Stanley has won three challenges and Edmond has frequently gotten low scores, so I think it might be Edmond who’s at a disadvantage. “It’s going to be a serious battle,” admits Edmond.

9:10pm — Anthony is trying to give Stanley an intervention: he’s making four pieces, and he might be biting off more than he can chew. He might need to edit himself because given their track records this season it would be a major upset for Stanley to lose the challenge to Edmond.

9:13pm — It’s interesting that the three best-performing designers of the season so far — Anthony, Fabio and Stanley — were pitted against the three more inconsistent designers — Ken, Helen and Edmond. I wonder if that was done deliberately, or if the jukebox really did randomly assign them genres.

9:15pm — “I’m going to leave it at four for now,” says Stanley, who is sticking with his ambitious plans for this challenge.

9:16pm — Time for guest mentor Rebecca Minkoff! She previously guest-judged “Thrown for a Loop by Betty Boop.” She says Helen needs to lean into country appeal and avoid looking too pop. She think’s Fabio needs to pare down his country look a bit. Rebecca recommends that Anthony practice his dance moves to make sure his design will actually move for a performance. Rebecca agrees with the concern that Stanley might be over-extending himself. And Rebecca says Edmond needs to “pick a lane” when it comes to the focus of his look.

9:19pm — Generally Rebecca was more positive than Anne Fulenwider usually is, though she was “scared” by some of the looks she was seeing. The designers seemed to prefer Rebecca as well. Perhaps Rebecca should be the permanent designer because she seemed much more supportive than the hyper-critical Anne.

9:21pm — Stanley thinks Edmond’s rock look is “perfection,” so it looks like he’s starting to sweat his own design choices. But Fabio is comforted when he sees Helen at work because he thinks her sequins won’t play well on the runway at all.

9:23pm — “Oh my god, why the f*ck did I choose sequins?” says Helen. She needed a break and literally laid out flat on the floor. She may be feeling the pressure just a little bit.

9:31pm — Okay, Helen is feeling a lot better after a night’s sleep, but I’m not sure how I feel about the black sequin dress. Her dress is supposed to be country, but I’m getting less Carrie Underwood and more Evanescence.

9:31pm — Anthony’s pop look is excellent so far. I can definitely see Rihanna wearing that.

9:32pm — Anthony isn’t sure about the “adult diaper” in Ken’s design. Well, they made similar complaints about Joshua’s “Betty Boop” design, so who knows, maybe it’ll win.

9:38pm — Hmmm, I’ve got to admit, I think Edmond is my choice to win the rock-and-roll face-off against Stanley. Edmond’s look is darker, edgier. Stanley’s is a little too clean and polished.

9:39pm — I like Fabio’s romper look and Helen’s sequined look, but I’m not sure I get a country feel from either of them.

9:40pm — Anthony’s black-and-blue look is excellent. I could immediately see Rihanna or Beyonce working the stage with that look. Ken’s look isn’t bad, though I’m not a fan of the adult diaper either and it doesn’t give me a pop-star vibe like Anthony’s does.

9:42pm — I’d say my two favorite looks overall are Anthony’s and (gasp) Edmond’s! Let’s see if the judges agree with me.

Stanley & Edmond (ROCK) — Georgina thinks Stanley’s look is “contrived” with too much matching, and she loved the “ease” of Edmond’s look, which “screams rock and roll.” Isaac doesn’t think Stanley “got it at all,” and he likes Edmond’s too. Olivia doesn’t think Anthony is appropriate for the stage, and Edmond did a “really good job.” Alyssa wishes Stanley had taken more of a risk. It looks like a unanimous decision: Edmond wins, Stanley loses — huge upset!

Fabio & Helen (COUNTRY) — Georgina thinks Fabio’s look is “cute” and “snappy,” but “too on the nose,” while Helen’s look is “cheap.” Olivia prefers Fabio’s look thanks to its softer color. Alyssa was worried for Fabio, but it worked out for him, while Helen’s look looked like a “Renaissance faire costume.” Isaac didn’t really like either look, but Fabio got the high score and Helen got the low score.

Anthony & Ken (POP) — Georgina loves the colors and the sheerness of the sleeves, and she actually loved Ken’s sheer jumpsuit too. Isaac likes Ken’s look a little better, but he doesn’t care for the coat. Olivia says Ken is “giving me life.” And Alyssa thinks it’s a tie between the two designers, but overall Ken got a higher score than Anthony. Another major upset! I disagree with this result, even though I thought Ken did a decent job.

9:53pm — I have a feeling Edmond is winning the challenge and Helen is probably going home.

10:00pm — Fabio is safe with his look, though it’s probably lucky for him that he was up against Helen. And Edmond indeed achieves his first design victory after weeks of poor performances, which makes Ken the runner-up.

10:01pm — Anthony had a low score, but unsurprisingly he’s safe since the judges actually liked his look. So the designer eliminated is … Helen. Stanley is safe, but just barely, and Isaac wants them both to know how close the competition was, how strong everyone’s work has been, and how high the level of competition is. That was meant as much as a warning to Stanley as it was a consolation for Helen.

10:05pm — That means we have an all-male top five. That’s pretty shocking since the women outnumbered the men at the beginning of the season nine-to-seven.

Who was eliminated? Helen Castillo

Who will be in the bottom two, but safe? Stanley Hudson

Who will win the challenge? Edmond Newton

Who will be the challenge’s runner-up? Ken Laurence

'Project Runway All Stars' twist: What did you think of the surprise elimination decision right before…

'Project Runway All Stars' recap: Who advanced to the finale after Anne Fulenwider judged 'Modern…

'Project Runway All Stars' fans are pretty sure Irina Shabayeva WILL win, but they're not so sure she…

'Project Runway All Stars' elimination predictions: Michelle may miss out on a spot in the…

Anthony Ryan Auld was eliminated from 'Project Runway All Stars,' and I am NOT here for it…

Worst elimination of the season? 'Project Runway All Stars' fans say judges got it wrong by axing…