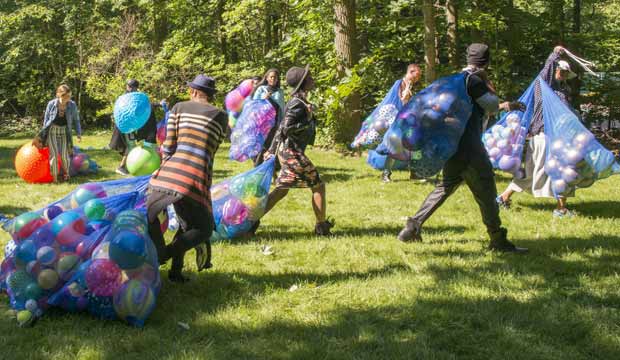 It was only a matter of time before the designers on “Project Runway All Stars” were faced with a dreaded unconventional-materials challenge. On Thursday night, January 25, the remaining 12 competitors used a variety of balls to construct their own unique ball gowns. So who created the ballsiest looks, and who was told to take their ball and go home? Scroll down for our live, minute-by-minute recap of season six, episode four, “Balls Out.”

This week’s show followed an especially dramatic third episode, “Perfect Pairings,” in which the designers were teamed up to collaborate on looks inspired by food-and-wine pairings. There were two winners of that challenge: Fabio Costa and Ken Laurence. But that means there was also a losing team, Melissa Fleis and Ari South, and they were both sent home in a double elimination.

The team that narrowly avoided elimination was Candice Cuoco and Merline Labissiere. They struggled to communicate and to reconcile their personal styles into two cohesive designs. But the judges gave them another chance, perhaps taking into account Labissiere’s much stronger showings in the first two challenges; she had the winning design in the season premiere and then got one of the high scores in “Damsels in Distress.”

Was Labisierre able to make a comeback? Did Costa and Laurence keep up their momentum following their challenge win? And was our predicted front-runner to win the competition, Amanda Valentine, able to stand out with her first victory? Find out below in our live blog. All times listed are Eastern.

9:00pm — The ball is in the designers’ court this week, and possibly many more ball puns for tonight’s show!

9:01pm — “You’ve be visiting and touring a castle!” teases host Alyssa Milano to the remaining 12 contestants. They’ll need to make a ball gown fit for a “modern princess … Have a ball!”

9:03pm — “I’m just trying to stay alive,” says Ken as he dodges other designers furiously fighting for the right balls from the pit. “How many times are we going to say ‘balls’ today?” asks Fabio. Many, many times I’m guessing.

9:05pm — Helen Castillo remembers winning the unconventional challenge in her original season of “Project Runway,” which may give her some added confidence in this challenge.

9:06pm — Kimberly Goldson isn’t quite as confident. She’s worried about exercising her usual creativity while struggling with strange materials.

9:08pm — “Balls got me, like, a mess,” says Helen, who seems to be struggling despite her strong track record as an unconventional designer. Josh McKinley worries she might be going home, though it’s too early to say.

9:13pm — “I think I just got lost in my head a little bit,” says Helen, who is considering designing a shorter gown than the traditional floor-length design.

9:14pm — “My material is stunning, but it’s ripping every step of the way,” says Anthony about his own balls.

9:18pm — Time for a consultation with mentor Anne Fulenwider: “I’m going to be just as hard on you as I always am.” Candice’s design looks a little like “Rainbow Brite.” She loves what Amanda is going for — cautiously optimistic. Ken is very “fashion-forward,” with great architectural structure. Kimberly is at a “‘My Little Pony’ convention.” Helen’s going dangerously ambitious with her own new textile. Anthony has “great potential.” Fabio is off to a good start, but shouldn’t get “too comfortable.” Stanley Hudson has “a ton of work” to do and is concerned the color effect he’s going for. “A lot of you didn’t grab enough balls,” she warns them in the end, advising that a modern ball gown doesn’t need to be long. The princess could be going to a rave.

9:20pm — “The fit on this has to be perfect,” says Amanda about the leather-effect look she’s going for, but she didn’t have anything ready to put on her model yet during the model fittings.

9:22pm — “It’s not coming together, and everything I’m putting together is hideous,” says Candice in a moment of insecurity. Her materials are tearing on her model. “I’ve probably changed my design a good 10 times because my material doesn’t behave.”

9:23pm — At the end of the work day it looks like Amanda has made the most progress, and Candice is intimidated.

9:27pm — Kimberly has a lot of work to do, maybe more work than she has time for. But Candice has gotten a second wind now that she’s working on her skirt. She sounds more optimistic.

9:28pm — Stanley is currently consumed with cutting and gluing to his muslin form.

9:29pm — “I think her craft alone will land her in the top,” says Amanda about Helen’s technique. And Ken thinks Fabio’s gold look will be the winning design.

9:37pm — “I’m really proud. It looks like a leather outfit,” says Char. “I think the vibrancy is taking away from the flaws,” says Anthony about his look.

9:38pm — I’m very impressed by the movement of Kimberly’s look and the polish of Helen’s design.

9:39pm — Edmond’s look is like a linebacker-warrior princess … and I think I love it.

9:40pm — “It looks like a deflated ball on the bottom,” says Candice, who isn’t happy with her look, and I think she’s right.

9:40pm — Fabio knocked this out of the park with his gold design. His model looks like Wonder Woman.

9:41pm — Merline, Edmund, Ken, Joshua, Anthony, and Char are called forward. They’re safely advancing to the next round. That leaves Helen, Amanda, Kimberly, Fabio, Stanley, and Candice as the designers with the highest and lowest scores.

Amanda — Georgina loved the back of the dress much more than the front. “I think it’s a great dress,” says Isaac, but he doesn’t think it’s an evening dress. Alyssa has issues with the fit.

Kimberly — “This was one of my favorite dresses,” says Alyssa. Georgina thinks it’s a little disappointing when it’s still but was great when it was moving.

Candice — “I’m a little disappointed,” says Georgina. “It’s incredibly unflattering … You don’t want a sagging ass.” Isaac is mad, but at the dress, not the designer.

Stanley — “I think you did an amazing job,” says Alyssa. Isaac loves the shape of it. Georgina is reminded of Audrey Hepburn.

Helen — Georgina thinks the look is too basic, while Helen criticizes others for gluing material onto muslin. Kacey thinks the colors remind her of Best Buy. None of them think the look is nearly fashion-forward enough.

9:50pm — “You undermined everyone else to make yourself look better,” says Fabio about Helen’s criticisms of her competitors’ use of colors and glue. “It was so crappy that even Isaac called it out” as throwing shade.

9:52pm — Isaac would like to eliminate Helen for throwing shade at her fellow designers alone. All the judges are bothered by her inability to accept criticism.

9:53pm — The top three and bottom three are called back out to the runway, but Helen is MIA.

9:58pm — Kimberly called as safe, while the winning designer is Stanley! That makes Fabio the runner-up. And we had predicted Stanley to be eliminated this week.

9:59pm — Amanda is called safe, so she’s not one of the bottom two designers. Candice is eliminated, while Helen narrow escapes in the bottom two.

10:00pm — “I’m sincerely sorry,” says Helen to the other designers she might have offended with her comments.

10:01pm — “I love what I do, so I know I’ll be doing it for the rest of my life,” says Candice, who has learned the all-important design lesson that not everyone has the balls for unconventional fashion … my last ball pun, I promise.

Who was eliminated? Candice Cuoco

Who will be in the bottom two, but safe? Helen Castillo

Who will win the challenge? Stanley Hudson

Who will be the challenge’s runner-up? Fabio Costa