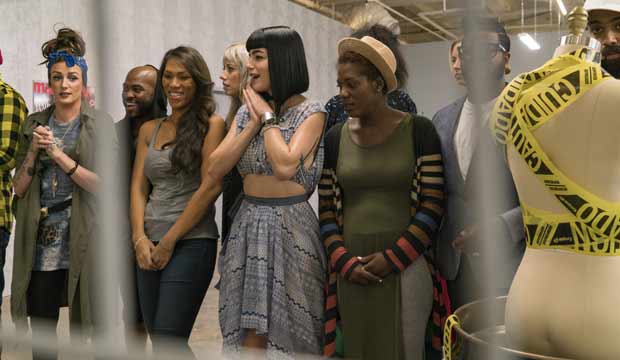 “Project Runway All Stars” season six started last week with the designers split up into two teams of eight, but they were on their own in a post-apocalyptic wasteland in episode two, “Damsels in Distress.” It was a challenge for them just to pronounce “post-apocalyptic,” let alone create distressed designs that looked like they’d been to hell and back. So accustomed to designing for beauty, some contestants were thrown off by the idea of adding wear and tear. So how did they do?

Arguably the most concerned going into this challenge was veteran contestant Anthony Williams, who much preferred pristine designs to distressed fashion. For his look he envisioned an African princess who survived some sort of cataclysm. Mentor Anne Fulenwider helped him synthesize his ideas by recommending that he focus on the narrative: “Crafting a story in your head will give you the methodology,” she told him about choosing his means of distressing.

Ultimately, Williams did even better than he thought he did. The judges raved about his look after it came down the runway. In fact, what concerned Isaac Mizrahi the most when critiquing the look was that Williams didn’t even seem to understand just how strong his design was. But Mizrahi didn’t hold that against him. He, Alyssa Milano, Georgina Chapman, and guest judge Danielle Brooks (“Orange is the New Black”) declared him the winner of the challenge.

Williams finished just ahead of Merline Labissiere, last week’s challenge winner, who this week came up with an elegant, futuristic, geometric look from another world. Mizrahi thought it was “fabulous,” while Chapman admired how much she improved her tailoring and Milano said, “It inspires me.” Rounding out the top three was Ari South. Mizrahi thought she went a bit too far with her blowtorch, but Milano was impressed by how she created a lace effect with fire.

Three other designers didn’t fare so well. Kelly Dempsey felt like she “nailed it” going into the runway show with her snowy look — complete with her own textile and custom-made earmuffs — but the judges weren’t impressed. Mizrahi said, “It didn’t show very well,” while Chapman compared it to a “bad Burning Man costume.”

Char Glover, last week’s challenge runner-up, also got low marks from the judges for her fire-fighter inspired look. Mizrahi loved the inventive train in her pant legs, but Chapman didn’t “really see a design,” and Milano thought it looked “like it got caught in a lawnmower.” And Stanley Hudson, who had never competed in an individual challenge before — he previously appeared in season 11 of “Project Runway,” which was all teams — had issues with time management that led to a dress whose top looked “a little cheap” to Chapman. Brooks thought it was “dated,” and Mizrahi wasn’t a fan of the green color.

In the end it was Dempsey who was sent home, a far cry from her previous “Runway” experience in season 14 of the original series, where she made it all the way to the finale and finished in second place. In fact, after last week’s challenge win for the team of rookies, all of this week’s bottom three contestants were rookies, while two of the three highest scoring contestants were veterans, including the winner. So perhaps the vets are simply better flying solo than they were in the team challenge.

Who was eliminated? Kelly Dempsey

Who will be in the bottom two, but safe? Stanley Hudson

Who will win the challenge? Anthony Williams

Who will be the challenge’s runner-up? Merline Labissiere