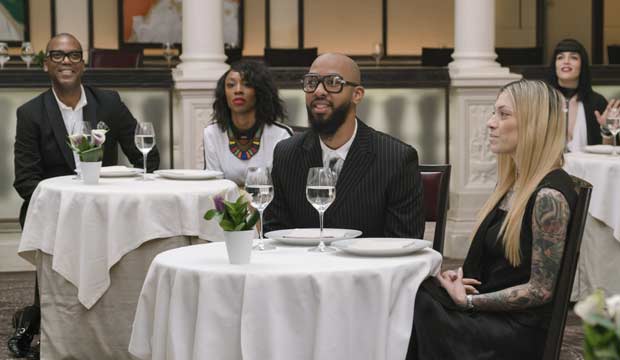 “Project Runway All Stars” season six began with a team challenge. Then episode two, “Damsels in Distress,” had the designers competing as individuals. This week “Runway” continued to keep its contestants off balance by pairing them off. Who benefited the most from this arrangement? Who struggled? And who went home in the dreaded double elimination? Scroll down for our live minute-by-minute recap of episode three, “Perfect Pairings,” to find out.

Season six of “All Stars” pits veterans against rookies. The veterans have competed in a previous season of “All Stars,” while the rookies are competing for the first time. But all of them have at least competed in one season of the original “Project Runway” series, so they all have experience. And so far the designers have been evenly matched. One veteran (Carlos Casanova) and one rookie (Kelly Dempsey) have been eliminated thus far, and additionally one rookie (Merline Labissiere) and one vet (Anthony Williams) have won design challenges.

Going into Thursday night’s new episode Labissiere had taken over the lead in our users’ predictions for who would win the season. She was also the frontrunner to win the “Perfect Pairings” design challenge. After narrowly escaping elimination last week, Stanley Hudson remained our odds-on favorite to be sent home, with Ken Laurence expected to end up in the bottom two, but safe. However, the show surprised us in its first two weeks. Will this unpredictable season continue to throw us — and the designers — curve balls? Find out below in our live blog. All times listed below are Eastern.

9:00pm — Here we go! Double elimination on the way at the end of the night. Can Char Glover and Stanley Hudson rebound after last week’s low scores?

9:01pm — The 14 remaining contestants are eating dinner at the restaurant Daniel in New York City. “Each dish has been perfectly paired with a wine complement,” says Alyssa Milano. And the designers are also paired based on which of their fellow designers they sat with. Their looks will be inspired by the food-and-wine pairings they’re served.

9:09pm — “I’m not quite sure where this is going,” says Cuoco about her partnership with Labissiere. Otherwise excellent designers could be tripped up by having collaborate with another designer who might not be on the same page, though Williams and Goldson seem to be getting on like a house on fire.

9:12pm — I’m most concerned for Glover and Hudson. They happened to be paired for a challenge one week after both landing at the bottom of the “Damsels in Distress” challenge, though maybe they’ll be especially driven to prove themselves. That mutual motivation might make their collaboration more fruitful.

9:18pm — Here comes mentor Anne Fulenwider! Williams and Goldson need to discuss their tops more. South and Fleis have interesting bead-work and fabric. Glover and Hudson are going “literal” with their interpreation of their dish, but Fulenwider likes it.  Valentine and McKinley must make sure not to be too safe. Laurence and Costa need to “amp it up.” Labissiere and Cuoco warns them that if of their looks is weak, they’re both going home.

9:19pm — Labissiere and Cuoco do seem to have the most difficulty collaborating, and they’re falling behind in their progress.

9:20pm — “It looks like a tampon and blood right before they come together,” says Williams about the two looks being created by Castillo and Newton.

9:21pm — During model fittings, South and Fleis were struggling to get the right fit on their pants. Fleis is starting from scratch on a new look.

9:22pm — “It’s not going to go well on the runway,” says Costa about the lack of communication and cohesion between Labissiere and Cuoco. The way the episode is highlighting the struggles between them, they’ll likely be on the bottom unless the editors are setting up a miraculous runway resurrection.

9:29pm — “I love Stanley’s dress. I love the color of it, that it’s young and happy,” says Costa about Hudson’s look with just a few minutes to go before the runway. Maybe he and Glover will pull through after all.

9:30pm — “This runway could be a disaster,” Labissiere admits, and Williams thinks her look is poorly constructed as well. After two weeks at or near the top, she could be eliminated just like that.

9:38pm — McKinley and South’s looks are showing a lot of skin. Not sure how that’s going to go over with the judges.

9:39pm — “They don’t pair,” Cuoco admits about her and Labissiere’s looks.

9:40pm — I think Glover and Hudson’s pink looks killed it. I have a good feeling about their looks. Same with the Williams and Goldson designs.

9:42pm — Valentine and McKinley, and Glover and Hudson are declared safe. As were Castillo and Newton.

9:45pm — Williams and Goldson’s critique:  “I like the boldness of color,” says Chapman about Goldson’s design. “You killed it this week,” adds Mizrahi about Williams’s look.

9:47pm — Labissiere and Cuoco’s critique: “I’m upset with you this week,” says Chapman to Labissiere. “It’s so imprecisely done … It’s very bothersome to look at.” It reminds Goldberg of “Star Trek.” “The hem on these pants is unacceptable,” says host Alyssa Milano about Cuoco’s look.

9:50pm — Laurence and Costa’s criqiue: “It felt like a pairing,” said Mizrahi about their strong cohesion. Goldberg admires how well the looks would work on a variety of body sizes. “I think you’ve done an exquisite job with your draping,” says Chapman about Laurence’s draping. Milano thinks they did an unbelievable job.

9:58pm — The joint winners of this week’s challenge is … Laurence and Costa! Williams and Goldson are safe.

10:01pm — “I wish I was able to show more,” says South upon exiting. “I disappointed myself,” admits Fleis. I’m sad to see both of them go since I feel like they had more to offer, especially South who had been so distinctive in the first two weeks of the competition.

Who was eliminated? Melissa Fleis and Ari South

Who will be in the bottom two, but safe? Candice Cuoco and Merline Labissiere

Who will win the challenge? Fabio Costa and Ken Laurence

Who will be the challenge’s runner-up? Kimberly Goldson and Anthony Williams