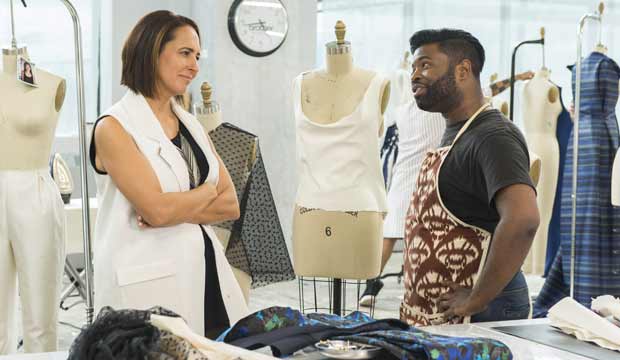 When Anthony Williams‘s collection came down the runway in the “Project Runway All Stars” season finale I knew immediately it was my favorite of the bunch. It did exactly as he intended, marrying the classic elegance of Audrey Hepburn with the dramatic flair and modernity of Rihanna. And the gown that closed out his seven-look collection was the night’s biggest showstopper. The judges agreed, declaring him the grand prize winner of season six. But what about you? Do you think Williams really had the best collection? Scroll down to vote in our poll at the bottom of this post.

I wasn’t sure how it would turn out after Williams received some mixed reviews from the judges. They especially loved his final look, and Alyssa Milano was relieved for the other designers that Williams showed his collection last and they didn’t have to follow him, but the peacock print was surprisingly controversial, with Isaac Mizrahi raving about it but Georgina Chapman notably less enthused about the pattern. There was also some debate over whether some of Williams’s sexier pieces were chic or cheap.

SEE ‘Project Runway All Stars’: Where are the first five winners now? [PHOTOS]

They ultimately decided that Williams won the night, but that’s not to say they weren’t fond of his rivals Fabio Costa and Stanley Hudson as well. Both got rave reviews. Costa’s work was described as “beautiful,” “heartfelt” and “innovative,” and Chapman was “stunned” by his collection. Hudson was “amazing” and “sophisticated,” and guest judge Catherine Zeta-Jones was “in awe.” Once they were done deliberating, Milano told the contestants, “This has been the closest race in ‘All Stars’ history.”

But now that the judges have had their say you can have yours. Vote below to let us know who you think had the best collection in the “Project Runway All Stars” finale.