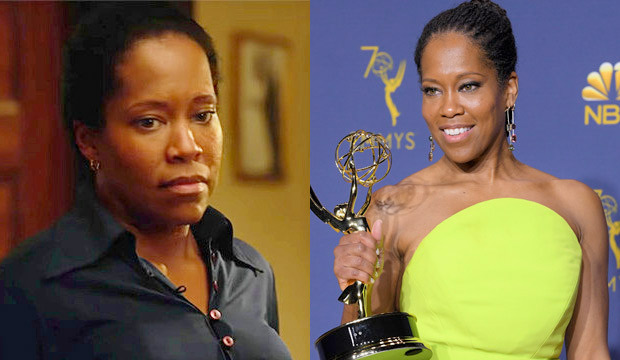 Best Supporting Actress at the Oscars has opened up in a major way for Regina King, who is earning some of the best reviews of her career for her role in Barry Jenkins‘ new film, “If Beale Street Could Talk.” King has been predicted to earn her first Oscar nomination after the rapturous response to her performance when the film debuted at the Toronto International Film Festival, and now there’s an avenue for her to win. This is all thanks to one of her presumed biggest Supporting Actress competitors now being campaigned in the Best Actress category instead.

“The Favourite” star Olivia Colman has been the subject of the classic, “Is she lead or is she supporting?” debates, for her highly acclaimed performance as Queen Anne. While Colman was being predicted by many to possibly win Best Supporting Actress, it has now officially been announced that she will compete in Best Actress, freeing up a slot in the former category. This is where King could benefit. In “If Beale Street Could Talk” the actress plays Sharon Rivers, a mother supportive of her daughter whose fiance is thrown in jail for a crime he didn’t commit. Critics have commended King’s performance as magnificent, and to combine that with such a classic supportive/suffering mother role Oscar voters love to reward is a potentially unbeatable fusion.

King is also one of the most well-respected actresses in show business today, as evidenced by her Emmy win last month for the limited series “Seven Seconds.” While the series wasn’t exactly the biggest hit, those in the audience rose to their feet to give King an enthusiastic standing ovation. Keep in mind, this was King’s third Emmy win in four years, winning for “American Crime” in 2015 and 2016, so she wasn’t exactly overdue with the Television Academy. That’s how much her peers love King, who started off her career in 1985 with the show “227.” Now steadily working in both film and television for over 30 years, she has earned a level of respect we see with other “character actors” who finally see their due, like J.K. Simmons with “Whiplash” and Octavia Spencer for “The Help.”

SEEBarry Jenkins: ‘If Beale Street Could Talk’ is ‘angry as hell’ [WATCH]

Of course, the race is far from over. King will probably have to compete with the likes of the overdue Amy Adams in “Vice,” Oscar winners Emma Stone and Rachel Weisz in “The Favourite” and Emmy winner Claire Foy in “First Man.” It will be a competitive race with all of these actresses in the hunt, not to mention Michelle Yeoh for “Crazy Rich Asians,” Nicole Kidman for “Boy Erased,” Margot Robbie for “Mary Queen of Scots” and Elizabeth Debicki for “Widows.”

While King has yet to earn an Oscar nomination, unlike many of those actresses, she has shown up in multiple Oscar nominated films over the years, including “Boyz n the Hood,” “Jerry Maguire” and “Ray.” Voters should be familiar with King’s screen presence, even if they haven’t seen her acclaimed television work from the past decade on shows like “American Crime,” “The Leftovers,” “Seven Seconds” and “Southland.” While Adams could very well take advantage and win with her overdue narrative, as many have been pushing since “Vice” was first announced, it could well be that King is the veteran who will finally get to shine bright in the spotlight.