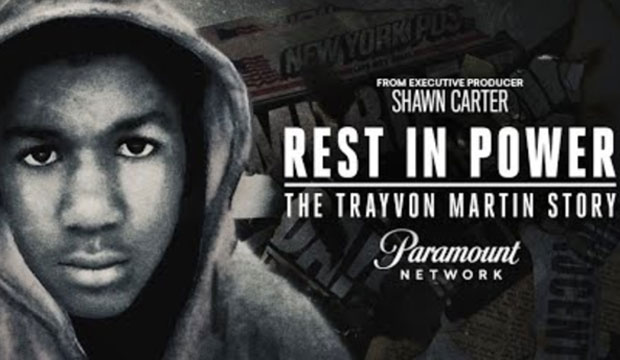 Paramount Network is to be lauded for its recent documentary series “Rest in Power: The Trayvon Martin Story.” Jay Z produced this critically acclaimed in-depth exploration of the background and story of the murder that ignited the Black Lives Matter movement. Martin was just 17 when he was shot and killed by a neighborhood watch member in the Sanford, Florida community on February 26, 2012. He had been there with his father to visit a family friend. George Zimmerman was acquitted of a second-degree murder charge after claiming he shot Martin in self-defense.

Recently, we’ve experienced a rise in black horror in cinema, including last year’s Oscar winner “Get Out” to this year’s sci-fi hit “Sorry to Bother You. As Robyn Bahr of The Hollywood Reporter observes “Rest in Power: The Trayvon Martin Story” tells a harrowing tale of  real-life horror and that’s what makes this film so affecting. “The filmmakers here take their time to dissect every inch of a racially incendiary crime.”

The six episodes of “Rest in Power: The Trayvon Martin Story” were directed by Jenner Furst and Julia Willoughby Nason.

Bahr readily acknowledges that is not an easy watch, but it is certainly an essential one: “Furst and Willoughby Nason’s work is an overwhelming collage of interviews, audio recordings and video footage, expertly stitched together to tell the story of a Skittles-carrying black teenager who was confronted by a paranoid neighborhood watchman and shot during their altercation.” Bahr cautions, “‘Rest in Power’ is not for the faint of heart: Viewers witness a number of chilling 911 recordings made the night of Martin’s murder, including George Zimmerman’s furtive calls to police as he approached the boy.”

Caleb Gayle of The Guardian awarded the series four stars, noting “it’s an elaborate patchwork of interviews, vivid recordings, and critically important historical nodes, which help unearth the devastating details of Trayvon Martin’s death, the trial proceedings, and their impact on perceptions of criminal justice and the Black Lives Matter movement.”  Gayle concludes “this docuseries should be required viewing for an education in race and criminal justice in America.” High praise indeed.