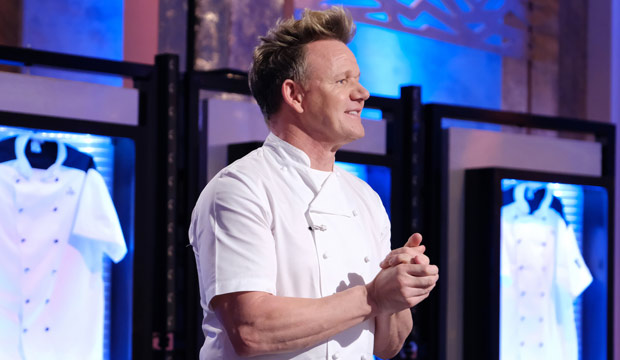 For the first time ever, Fox’s reality TV show “Hell’s Kitchen” has pitted first-time players against returning chef-testants for what’s been dubbed “Rookies vs. Veterans.” In last week’s Season 18 premiere, fans were re-introduced to the eight veterans who entered the kitchen wearing silly wigs, glasses and prosthetic noses to initially trick the rookies into thinking they were newbies. Of the eight returnees, who MOST deserves a second chance at becoming Gordon Ramsay‘s next head chef? Vote down in our poll below.

Here’s a closer look at the five returning women:

Head chef Roe DiLeo (fifth place in Season 13) was previously eliminated when her performance suffered, but Ramsay still saluted her work ethic. She now works at City Tavern in Dallas. In the first challenge of Season 18 she prepared rookie Scott Popovic‘s signature dish of a pan-roasted black bass over root vegetables.

Jen Gavin (fourth place in Season 4) was a pantry chef who had a bit of an attitude problem. She was previously cut in week 12 for her lack of team work skills. For a while, she was a chef for a celebrity catering company, cooking for the likes of Paul McCartney and Lady Gaga. She chose to prepare Mia Castro’s signature dish in the premiere of grilled pork tenderloin with chorizo chimichurri.

T Gregoire (runner-up in Season 14) was a line cook who came in second and just missed winning the title. She would later become an executive chef. Rookie Chris Motto‘s New Orleans barbecue shrimp and grits was the signature dish she had to prepare.

Ariel Contreras-Fox (third place in Season 6) was good enough that Ramsay allowed her to keep her black jacket in recognition of her hard work. She is currently a corporate executive chef for Landry’s SRD Dos Caminos. In the Season 18 starter she chose to prepare Jose DeJesus‘s signature dish of pan-seared scallops with parsnips

SEE‘Hell’s Kitchen’ Season 18 cast photos: Which Rookies and Veterans will battle it out to impress Gordon Ramsay?

And here’s a refresher on the three veteran men:

Kevin Cottle (runner-up in Season 6) lost to Dave Levey and returned to being an executive chef. Rookie Kanae Houston‘s signature dish of Louisiana-style fish stew with plantains was Kevin’s choice to reproduce in last week’s episode.

Sous chef Bret Hauser (medically evacuated in Season 14) was previously forced to leave after an accident caused further injury to a slipped disk. He went on to be an executive chef at Pizza Craft Artisan Pizzeria and now does private chef experiences. In this season’s premiere he chose to prepare Chris Mendonca‘s signature dish of pan-seared duck breast with mango and blackberry puree.

Trev McGrath (fourth place in Season 8) was cut during episode 14, but got points from Ramsay for his determination. He ended up in television, working as a consultant for CNBC and the Food Network. Scotley Innis‘ pan-seared snapper with a coconut curry sauce was the signature dish that Trev took on last week.