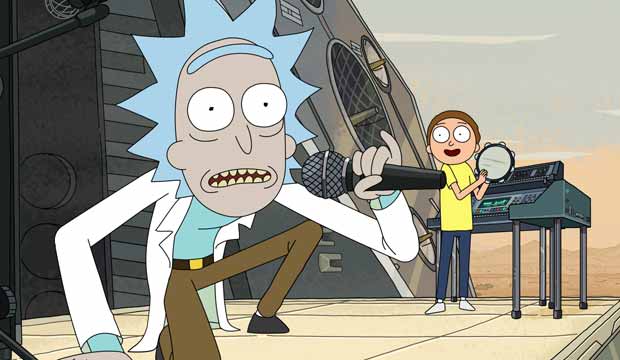 After getting snubbed for its first two seasons, “Rick and Morty” won the Emmy for Best Animated Program at Saturday night’s Creative Arts ceremony for the episode “Pickle Rick.” The program was in second place, according to the combined odds in our predictions center with 4/1 odds of prevailing.

In the episode, Rick transforms himself into a pickle to in order to avoid going to family therapy with Beth, Summer and Morty. He then finds himself being washed down a sewer drain and having to fight off armies of insects, rats and even an intelligence service. At the family therapy session, it becomes painfully clear how much of a negative dynamic the Smith family has and when Pickle Rick turns up for the end of the session, he’s forced to confront it as well.

The favorite in the category this year was “Bob’s Burgers” with the episode “V for Valentine-detta.” The two-time winner had 2/5 odds of winning. Tina is depressed after being dumped by Jimmy Jr. before Valentine’s Day so Linda decides to take her and Louise on a fun girls night out in a rented limousine. The adventure becomes revenge when Linda finds out the details of the breakup. Bob and Gene end up spending Valentine’s Day at a couples trapeze lesson where both encounter issues with not being able to literally let go.

“The Simpsons” was in third place, according to the combined odds in our predictions center with 25/1 odds of picking up the honor for the 11th time. They submitted the episode “Gone Boy.” Bart falls down a manhole into an abandoned military bunker and is declared missing. Milhouse fails to alert the authorities, leading Bart to be declared dead. This leads to Sideshow Bob attempting to find Bart and then, once again, trying to kill him but ultimately having a change of heart. A flash-forward into the future reveals that Bob will never get over fixating on murdering Bart Simpson.

“Big Hero 6: The Series” was ranked fourth in our predictions center with 28/1 odds of being victorious. The show, based on the Oscar-winning film, submitted the pilot episode “Baymax Returns.” Hiro finds the personality chip for the inflatable robot, Baymax, and rejoins the friends he made following his brother’s death. Mr. Yama tries to use Hiro and the university students to steal something from the school’s dean but the crew manages to thwart him and Hiro is granted access to use his brother’s old laboratory.

“South Park” was in last place according to the combined odds in the predictions center with 66/1 odds of winning. The five-time winner was nominated for the episode “Put it Down.” Tweek becomes increasingly agitated and neurotic over the President’s tweets about North Korea. Tweek tries to make things better but the President continues to make things worse. Craig is left trying to find ways to comfort Tweek. Cartman attempts to raise awareness for suicide prevention by repeatedly threatening to kill himself but is constantly losing attention to deaths resulting from distracted drivers reading the President’s tweets on their phone.