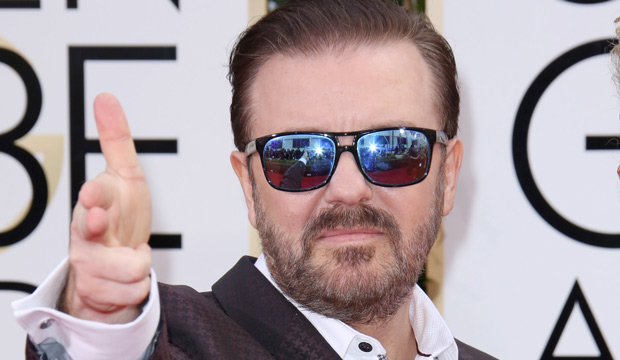 For many decades the Golden Globes opted not to have a host, but then in 2010 that all changed when they invited Ricky Gervais to oversee their live ceremony. Gervais’ acerbic nature and take-no-prisoners attitude was such a success that the Hollywood Foreign Press Association invited him back in 2011. And again in 2012. Gervais then took a break as Tina Fey and Amy Poehler hosted three years in a row (2013-15), but he returned in full force in 2016. Since the upcoming 2019 ceremony will mark three years since Gervais last graced the stage we are, to put it mildly, going through withdrawals. Should the HFPA invite him back? Vote down in our poll below.

During Gervais’ last appearance he took Hollywood to task for its “disgusting, pill-popping, sexual deviant” ways. He joked that, “I’m going to be nice tonight [because] I’ve changed — not as much as Bruce Jenner.” He also jabbed Fey and Poehler, saying, “Of course woman should be paid the same as men for doing the same job. And I’d like to say now, I’m being paid exactly the same as Tina and Amy did last year. No, I know there were two of them, but it’s not my fault if they want to share the money, is it?”

Gervais’ political views were always on full display, including when he introduced Eva Longoria and America Ferrera as, “Two people who your future president, Donald Trump, can’t wait to deport.” Trump wound up winning the election 10 months later, so we’re just dying to see what Gervais would say about the sitting POTUS if he got another chance at bat.

The past two years we saw NBC’s late-night stars take over the Globes ceremony: Jimmy Fallon in 2017 and Seth Meyers in 2018. Since the HFPA just inked a new deal to stay on the peacock network for the next eight years, might they ask Fallon or Myers to return 2019? NBC also just acquired “Brooklyn Nine-Nine,” so Andy Samberg could be another potential Globes host as he previously emceed the 2015 Emmys.

Nominations for the 76th Golden Globe Awards will be announced Thursday, December 6 in 14 film categories and 11 television races. The ceremony will air on Sunday, January 6 on NBC.