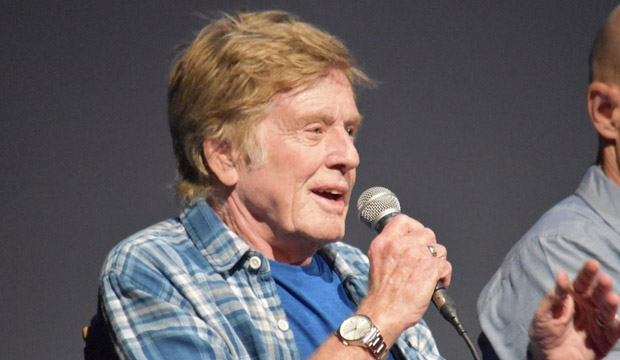 “Redford speaks!” That could be the headline for Robert Redford‘s appearance in “The Old Man and the Gun,” a la Greta Garbo‘s move into talkies, even though he’s never been quite as speechless as her. The last time Redford came to the Telluride Film Festival it was for the premiere of “All is Lost,” his all-grimacing, no-yammering tale of a man fending off death at sea. In this one, he not only talks a lot, he smiles a lot. This is supposed to be his last film before retiring, and obviously he wanted to go out glowing, not grimacing.

“Old Man and the Gun” is loosely based (how very loosely based, we found out in a panel discussion after the screening) on a true-life “gentleman bandit” of the late 1970s who became famous for his good manners. The real bank robber, Forrest Tucker, probably was not as charming as the Sundance Kid and “The Sting’s” Johnny Hooker all rolled into one, the way he is in this breezy film. But there’s some real comfort in seeing Redford so at ease in front of the camera again at 82. That’s no doubt why Telluride chose the film for its coveted “patrons’ screening” slot, where the older, more well-heeled attendees who buy the most expensive passes get an exclusive, semi-secret showing before the rest of the festival kicks off in earnest.

“I was attracted to Forrest because he was happy,” said Redford, addressing the 650 gathered in the Herzog Cinema for the world premiere. “The film that I had done just before was called ‘Our Souls at Night’ and it was a pretty heavy lift —very dramatic, and a pretty sad story. It left you sad doing it. I thought, ‘If I could just bounce into something fresh and new.’

“In my career I’ve always made a point of going in the opposite direction after doing a film,” he said, citing how he did the lighter “Milagro Beanfield War” after starting his directorial career with “Ordinary People.” “This one had so many positive aspects to it. I thought, ‘That’s a nice twist—to play a guy who robs banks because he just loves robbing banks.'”

Redford almost didn’t make it to the premiere of his supposed swan song. As it was, he arrived two-thirds of the way into a post-screening Q&A that had to initially rely on his character’s love interest, Sissy Spacek, his police adversary, Casey Affleck, and director David Lowery (“A Ghost Story”). A couple of hours earlier, at the festival’s annual press briefing, Telluride executive director Julie Huntsinger had to interrupt her talk to take a call informing her Redford’s plane had been diverted from Telluride’s tiny mountain runway to Montrose, an hour and a half away — something she says happens a lot, with film companies wanting to bring their talent in at the very last minute to a nerve-wracking airport where the mere appearance of a cloud can shut things down.

“The press is loving this in real time,” Huntsinger told the staffer on the other end. “Go get one of the Lamborghinis!”

Another thing Huntsinger said at the press briefing was that she hoped Redford got the attention he deserved for “Old Man” because she felt he was “robbed” of the Oscar nomination that was widely expected after “All is Lost” premiered in these mountains five years ago. That film was seen as Oscar bait, before it somehow faded from view deep into awards season. “The Old Man and the Gun” is too frisky to come off as remotely tailor-made to dominate the awards conversation, as a whole, so it would be deeply ironic if this were the one that finally got him his first acting nomination from the Academy since 1973.

Most of those present made a point of acknowledging that the film is a lark.

“After having made a series of heavy films myself, including the saddest Disney film ever (‘Pete’s Dragon’) I wanted to shift gears and try something different,” Lowery said. “There’s some heavy stuff in it. There’s more going on than just light heartedness, but it was nice to know at the end of the day that was what we were going to rest on, those things that made us smile.”

Moderator John Horn asked about the choice to use stills from Redford’s youthful acting career in a montage toward the end of the movie. “I thought it could kill the movie,” Redford admitted of the idea. “Bob, you’ve got a great face,” retorted Lowery. “I didn’t want to make this a commentary on the aging process, but that’s implicit in the film and in there in the title, and we didn’t have to underline it.”

There’s one brief vintage live-action flashback as the robber recalls his 16 escapes from prison. “Bob’s got a wonderful library of work, and I thought, ‘Surely there’s a film with a prison escape’ … and there’s a wonderful Arthur Penn film that has a lot of running from the law, ‘The Chase,’ and we were lucky enough to get a clip from that.”

Did he really say this would be his last film?

“I think I also said, ‘Never say never,'” Redford responded, drawing applause before dashing hopes again for an extended octogenarian career. “The truth is that I really do feel that it’s time for me to move into retirement, and I think I‘ve been doing this since I was 21, and I think I’ve put my soul and heart into it over the years. And I thought, ‘That’s enough — why don’t you quit while you’re a little bit ahead? I mean, don’t wait for the bell to toll — just get out.’ So I felt my time had come and it’s time to move into at least semi-retirement, and I couldn’t think of a better project to go out on than this film.”

And Telluride’s upscale patron passholders mostly couldn’t think of a better way to usher the fest in… as a feel-good inoculation against all the brutality, genocide and other typically darker festival subjects about to come over the next three days.