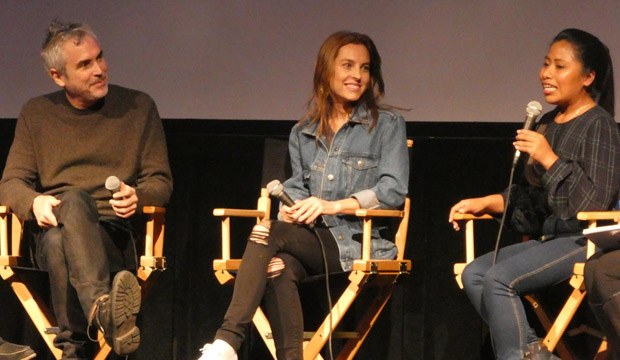 Only 10 times in history has a foreign-language film been nominated for Best Picture at the Oscars. The first: “Grand Illusion” in 1939. The last: “Amour” in 2012. That may be more than you figured, but here’s a stat that might be lower than you thought, given the prominent rise of Mexican filmmakers in recent years: Never, ever has a movie set primarily in Mexico or even spoken primarily in Spanish been nominated for the academy’s top prize. (Note: “Traffic” and “Babel” don’t count because “primarily” doesn’t apply.)

Now could Alfonso Cuaron‘s “Roma” be the one to break that south-of-the-border shutout with a Best Picture nomination?

You’d be hard-pressed to find anyone at the Telluride Film Festival this Labor Day weekend who wouldn’t sign off, not just on “could be,” but “will be.” Whether it actually wins is another matter, but virtually any case you could make against that happening — too intimate, too plotless, too much of a thinly fictionalized childhood memoir to be universal — is also the argument you would have been making against “Moonlight” two years ago. That pretty much just leaves the unprecedented all-espanol argument as the main reason it could never happen. In the culture of 2018, does anyone believe that’s an impenetrable barrier?

Talking with folks in line at this weekend’s festival screenings, I found “Roma” was one of the three major films that came up most often for praise and deep affection among rank-and-file passholders, the other two being “First Man” and “Can You Ever Forgive Me?” That cemented the same buzz coming out of a world premiere in Venice just days earlier.

The closest thing I found to a reservation about it came from a producer of one of the big American offerings here, who said the film didn’t affect him emotionally as much as he wanted — and he then proceeded to spend a full five minutes gushing over the brilliance of some of the incredible technical feats in the film, including some of the breathtaking long takes and dolly shots that have been the trademark of previous Cuaron films like “Gravity” and “Children of Men.” In other words, he might have been a little distracted. Pretty much everyone else I talked to noticed the tech less and felt the feels more. Watching “Roma,” you can measure the tracking shots or the tracks of your tears — either will suffice.

After a screening in the Herzog (a town hockey rink that gets magically transformed into a first-rate Dolby cinema one weekend a year), Cuaron took a few minutes away from the well-wishings he was receiving in the lobby from fans like Emma Stone, Casey Affleck and theater namesake Werner Herzog himself. I asked whether he felt that it was about time a Spanish-language film was up for the top prizes and not just the wonderful ghetto that is Best Foreign Film. He didn’t quite go there, but did take some pride in having combined micro subject matter that hit close to home with the macro production values he’d earned the right to keep using as a veteran of Hollywood blockbusters.

“You don’t think much about those things,” he said when I brought up the awards question. “I just think that what I’m certain of is that there are a lot of people who worked on the film that did an amazing, amazing job. From the get-go, it was the intention of doing a film in Mexican Spanish, black and white, with non-actors, but at the same time using all the resources of the Hollywood tools that I’ve been using in the last few films, so it would be a film technologically at the same level with any other Hollywood film.”

It’s a movie directly based — just how directly based, I’ll get to in a minute — on Cuaron’s childhood circa 1971. But it’s not his story, although there’s a small role in the movie for a boy who’s obviously him. “Roma” is really the true story of the nanny his fairly posh family employed, and how she helps keep the family together through a divorce while having some problems of her own, like an unplanned pregnancy where her water breaks in the middle of a political riot, and a brush with a very rough riptide.

If that sounds small-scale, well, it often is. But the movie goes as unexpectedly big as its lusciously painted wide-screen black-and-white photography in some shots and takes that leave you wondering whether Cuaron employed digital trickery or really did wrangle all those locales and extras and weather patterns.

There’s also a lot of movie love embedded in the film. The heroine tells her boyfriend she’s pregnant while they’re watching a film in a movie palace … and gets to see the ending alone. On a more fun geek level, the boy in the family insists they go see the space drama “Marooned.”

So I had to ask Cuaron: Is the clip of “Marooned” in this film a sly nod to “Gravity” … or was “Gravity” just a full-on homage to “Marooned”?

“Oh, ‘Gravity’ was a nod to ‘Marooned’,” he answered. “‘Marooned’ is a film that was playing at the time, and it is a film that I adored as a child. But also there’s a symbolic element here, of characters drifting in the void where they need human contact for the rescue.”

In a Q&A that took place inside the Herzog, Cuaron detailed just how exact a replication of his childhood this was: “We shot in the places where the scenes really took place, all reproduced by the inch. My mother’s house has been way too subdivided and transformed, though. So we took measurements and we reproduced a perfect replica of the house. And we got 70 percent of the original furniture from my childhood, from different members of the family.

“The cast was something similar. It was about finding the people that were just lookalikes or that resembled as much as possible the original people — not only physically but in terms of their qualities. We were looking for professional actors or non-actors – it didn’t matter. They had to look alike or have the same qualities. And in the end, the family is composed of non-actors, except for Marina (de Tavira, who plays the mother), who is a trained actor. And then it was, OK, but are they going to be able to act?” (They do.)

“Roma” might sound like a vanity project, but it transcends that, in spite of or because Cuaron “had the opportunity to reproduce my childhood. And I’m shooting the street of my childhood with exactly the cars that were there, with extras that are lookalikes of the neighbors. Everything is identical. How many people have the chance to do this?”

But he realized he was in “a really lousy mood” and had to take a walk away from the set a few times when he realized exactly what he’d set himself up for, emotionally. “I realized I was directing my dad leaving my family… That was a F-ed up part of the process.”