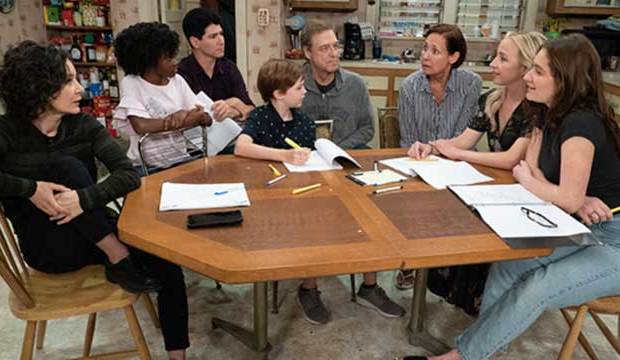 Danny Zuker, a former writer on “Roseanne” and current producer on “Modern Family,” just told CNN’s Brooke Baldwin that he’s pleased with how ABC killed off Roseanne Barr‘s character during Tuesday’s series premiere of “The Connors” spinoff. “I thought they handled it really well,” he said the morning after the episode aired that served as a cautionary tale about America’s reliance on opioids. “I’m happy to see them do well. I really liked the episode last night.”

Because of Barr’s racist tweets last May, ABC canceled “Roseanne” despite it being a ratings behemoth. Soon after, they announced the creation of “The Connors,” which would continue the story of America’s favorite family only without their controversial matriarch. That “Roseanne” revival received two nominations at the 2018 Emmys: Best Comedy Supporting Actress for Laurie Metcalf and Best Multi-Camera Picture Editing for Brian Schnuckel.

Zuker readily admitted that he was only a “baby writer” on the original series, penning the 1995 episode “Rear Window.” “I think we had 30 writers on the show,” he recalled. “It was the biggest staff I’d ever worked on. That show taught me everything I know about sitcom writing — how to write something that was funny and real and resonate.”

SEE‘Roseanne’ cancelled: Relive original series’ best 25 episodes of all time including pot-themed ‘A Stash from the Past’

While “The Connors” made the bold decision to kill off the Roseanne character, the rest of the cast is back as their iconic characters, including John Goodman as Dan, Metcalf as Aunt Jackie and Michael Fishman, Sara Gilbert and Lecy Goranson as the three Connor children. Zuker added, “It’s such an amazing cast. For me, as a young writer when I got to work there, it was like getting to play professional baseball because everybody was so good.”

Zuker is a five-time Emmy winner for producing “Modern Family” (2010-14). He also recently wrote a book titled “He Started It! My Twitter War with Trump” in which he chronicles his very real feud with President Donald Trump.