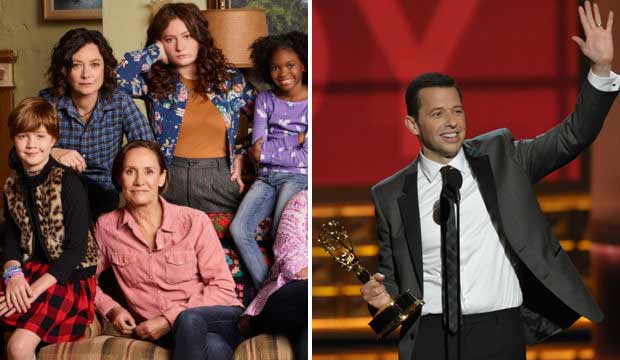 The abrupt cancellation of “Roseanne” on May 29 was a dire blow to the Emmy chances for the high-rated sitcom revival. In the eyes of Emmy voters, the whole project may be tainted by star Roseanne Barr‘s racist tweets. But the cancellation of the show also put her co-stars and crew members out of work. So is it possible that residual goodwill for John Goodman, Laurie Metcalf, Sara Gilbert and company could boost their Emmy prospects even as Barr’s stock has dropped? It worked for Jon Cryer.

Cryer co-starred in “Two and a Half Men” with Charlie Sheen, but that CBS sitcom was thrown into turmoil by Sheen’s drug addiction and conflict with series creator Chuck Lorre. Sheen abruptly departed the show after seven seasons, his character was killed off, and Ashton Kutcher joined the cast in his place.

But it also led to a promotion of sorts for Cryer, who had earned six Emmy nominations as a supporting actor for the show, winning in 2009. Sheen’s exit led Cryer to move up to the lead-acting race, and he won on his first and only nomination there in 2012. It probably helped that he had Hollywood’s sympathy for weathering the Sheen storm.

So perhaps we’ll see the television academy similarly rally around the “Roseanne” cast, who were set adrift by their co-star’s actions. Goodman is an 11-time Emmy nominee with one win for guest starring in “Studio 60 on the Sunset Strip” (2007). Metcalf won three Best Comedy Supporting Actress Emmys (1992-1994) for “Roseanne” during its original run, and she has accumulated 10 nominations in her career overall. And Gilbert, who quickly denounced Barr’s statements, was nominated twice for Best Comedy Supporting Actress during the show’s original run and more recently has won three Daytime Emmys as a producer and host of the series “The Talk.” The industry has supported them before, so they may not be found guilty by association.

However, “Two and a Half Men” didn’t have the heavy political baggage that “Roseanne” carried thanks to its star’s conspiracy theories and vociferous support for Donald Trump, so it was able to continue airing without Sheen. As of this writing it doesn’t look like “Roseanne” will continue at all — though the door hasn’t entirely closed on the possibility of “Roseanne” without Roseanne — so the stigma of the cancellation may further hurt the show’s entire cast and crew.

Even before the controversy it was hard to predict how Emmy voters would greet “Roseanne” after 20 years off the air. It may be tough for them to vote for the Conner clan in any way now.