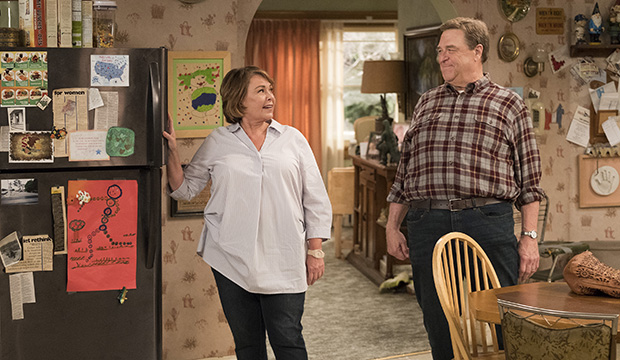 “Roseanne”’s premiere ratings were so huge that not only did President Donald Trump take credit for them, but they’ll lead to the sitcom’s first-ever Best Comedy Series Emmy nomination, our readers believe. About 41 percent of readers polled feel the revival will be buoyed by the tremendous reception to last week’s premiere, which drew 18.2 million viewers — almost two million more than the audience that tuned in for its 1997 series finale — and led to a quick Season 11 renewal.

On the flip side, 31 percent of readers think “Roseanne” will be sitting on the sidelines yet again. They had never nominated it before, so why would they now, right? Not helping matters is Roseanne Barr’s vocal support of Trump and her incendiary tweets that have included accusing Parkland shooting survivor David Hogg of giving a Nazi salute; she later deleted it.

The remaining 28 percent of voters are on a wait-and-see track with the show. Though unlikely, “Roseanne”’s ratings could very plummet this week as the novelty factor of the revival wears off — or viewers start boycotting Barr in general.

“I will also pass on watching her show, it’s amazing what people will just for money, I have heard Roseanne speak, which she has full rights to and deserve,” user Hunt Andrews wrote. “But at the same time we have the right not to listen, or buy the products that sponsor her show. It’s just amazing how many sheep out their [sic] that just follow people or news with verifying or just using their own mind.”

Since the premiere, “Roseanne” has moved up one spot to 11th place in our Best Comedy Series odds.