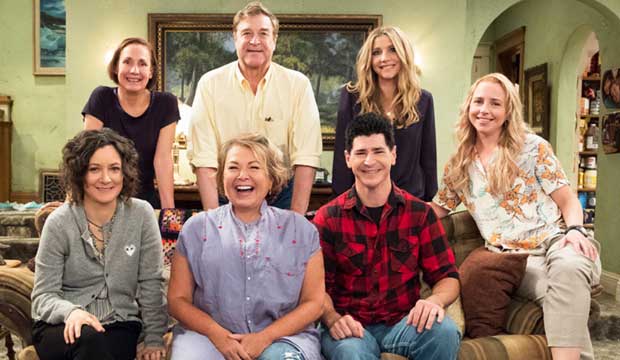 Over his remarkable career on the small screen, John Goodman has earned a total of 11 Emmy nominations, including seven for his role as Dan Conner on “Roseanne,” the series that launched his career. However, none of those seven bids proved to be lucky for him. His sole Emmy win came in Best Guest Drama Actor for “Studio 60 on the Sunset Strip” in 2007.

While Goodman never won an Emmy for his acclaimed turn  on “Roseanne,” leading lady Roseanne Barr won once while scene-stealer Laurie Metcalf took home three Best Comedy Supporting Actress trophies. This year, with the much-anticipated revival of the series, Goodman could finally win an Emmy for portraying the Conner family patriarch.

Despite his unsuccessful run at the Emmys, Goodman was no amateur at selecting exceptional episodes of “Roseanne” for voters’ consideration.

SEE ‘Roseanne’: Which Becky is in opening credits for revival? [WATCH]

For the show’s first season, Goodman submitted “Dan’s Birthday Bash,” in which Dan’s birthday party at the local Lobo Lounge is interrupted by a drunk, hostile customer. After an altercation that nearly turns violent and leaves Roseanne none too pleased, Dan wrestles over whether he should confront the man the next time he sees him. Richard Mulligan of “Empty Nest” defeated Goodman on this occasion.

Season 2 found Goodman sending “Born to Be Wild,” in which Dan and Roseanne face something of a mid-life crisis, visited by an old friend who has the energy and independence they no longer have. This year found Ted Danson (“Cheers”) finally prevail after seven consecutive losses in the category.

For Season 3, Goodman submitted “Her Boyfriend’s Back,” in which Dan is incensed after daughter Becky (Lecy Goranson) and her boyfriend Mark (Glenn Quinn) borrow his beloved motorcycle without his permission. “Evening Shade” star Burt Reynolds triumphed on Emmy night

For the show’s fourth season, Goodman sent “The Back Story,” in which Dan is stuck living alongside mother-in-law Bev (Estelle Parsons), who comes into town to take care of Roseanne, who has thrown out her back. The two clash when Bev purchases grandson D.J. (Michael Fishman) the Super Nintendo that Dan and Roseanne planned to buy him. Craig T. Nelson (“Coach”) prevailed this time around.

For Season 5, Goodman submitted “Terms of Estrangement, Part 2,” in which Dan is beside himself after Becky and Mark run off to get married. Upon their return home, Dan refuses to speak with his daughter. Danson again triumphed this year, for the final season of “Cheers.”

Season 6 found Goodman sending “Guilt by Imagination,” in which Dan has lunch with an old flame who Roseanne detests and struggles to keep it a secret from her. Goodman hadn’t a prayer against Kelsey Grammer, winning for the first season of “Frasier.”

Finally, for the show’s seventh season, Goodman submitted “The Blaming of the Shrew,” in which Dan is perplexed by D.J.’s new girlfriend, a bossy teenager whose treatment of D.J. rings all too much of Roseanne’s treatment of Dan. Grammer again won on the big night.

‘Meet the Experts’ TV showrunners panel: ‘A Friend of the Family,’ ‘Godfather of Harlem,’ ‘Let the Right One In’ [Exclusive Video Interview]

Andrew Hinderaker ('Let the Right One In' showrunner): 'What are you willing to do for someone you love?' [Exclusive Video Interview]

Nick Antosca ('A Friend of the Family' showrunner): A story 'too disturbing, too uncomfortable, too hard to comprehend' [Exclusive Video Interview]