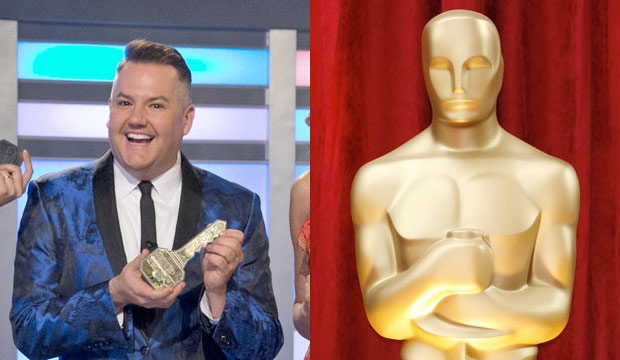 Ross Mathews recently finished in second place on “Celebrity Big Brother,” but the outspoken TV personality spends most days chatting it up with movie stars on the red carpet and providing commentary on pop culture. In our recent interview with the self-proclaimed Gold Derby fan, we couldn’t pass up the opportunity to pick his brain on this year’s perplexing Best Picture race.

“You really have to feel the buzz,” Ross declares in our video below, which begins at the 11:39 minute mark. “I’ve been away for the last month, so maybe I’m being naive here. But I think Globe win, SAG win, BAFTA win … it’s ‘Three Billboards Outside Ebbing Missouri.’ I don’t know how you deny it.”

Ross is picking odds-on favorite Guillermo del Toro as Best Director for his work on “The Shape of Water” but he believes we could see an upset in either of the supporting acting races. “If there’s gonna be an upset it could be Woody Harrelson (‘Three Billboards’) or it could be Laurie Metcalf (‘Lady Bird’),” he speculates. “You never know, but those performances were beloved. I think Woody’s character was more lovable than [Sam Rockwell’s].” Rockwell is currently favored to win Best Supporting Actor while Allison Janney (“I, Tonya”) has leading odds to take home Best Supporting Actress.

Like most awards pundits, Ross believes Frances McDormand (“Three Billboards”) and Gary Oldman (“Darkest Hour”) are unstoppable on their quest for Oscar gold. “Look for a surprise [in the supporting races], there won’t be a surprise in Lead [Actor or Actress].” Find out if Ross is right when the Oscars air live Sunday, March 4 on ABC. See complete Gold Derby racetrack odds in all 24 categories.