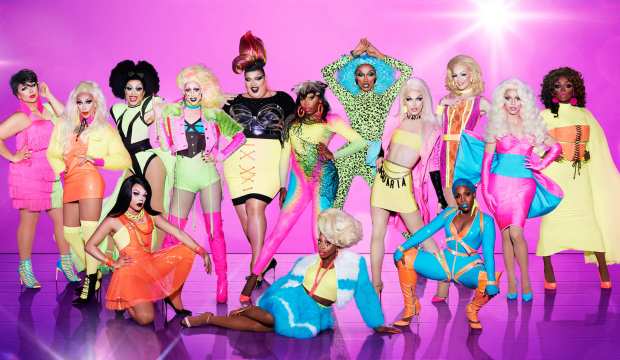 The fourth episode of season 10 of “RuPaul’s Drag Race” airs April 12 on VH1. On “The Last Ball on Earth,” the remaining 11 queens will be divided into teams to tackle the main challenge: creating new looks for winter, summer and and one that is out of this world.

Joining RuPaul Charles, Ross Mathews and Michelle Visage on the judges panel in episode four will be actresses Logan Browning (“Dear White People”) and Tisha Campbell Martin (“Dr. Ken”). Our exclusive Gold Derby predictions are forecasting that they will choose sassy New Yorker Miz Cracker, 33, as the winner of this main challenge.

POLL ‘RuPaul’s Drag Race’ 10 episode 4: Was the right queen eliminated in ‘The Last Ball on Earth’?

Conversely, we are predicting that Dusty Ray Bottoms, a 29-year-old who also hails from the Big Apple, will be eliminated at the end of episode four. Do you agree? Be sure to make your predictions at the bottom of this post. For now, follow along for our minute-by-minute live recap. Keep refreshing throughout the episode for new updates.

7:50 p.m. – Remember when Blair St. Clair was the queen we all predicted would be the first eliminated? Well, are you as shocked as I am to realize that after three episodes she’s received a high score every time? It’s true, statistically speaking she is the best performer so far this season, a cut above Cracker who has two high scores and Mayhem Miller who also does, but fell into the bottom two last week and had to lip sync for her life. Can Blair finally pull out a win for herself or is her streak of high scores coming to an end? I’d legit gag if she kept it up–come through underdog queen!

8:02 p.m. – Following last week’s “Untucked,” Monique Heart has a bone to pick with Mayhem who threw her under the bus during her critique on the runway with regard to their team challenge. The issue stems from Mayhem falling into the bottom for being too reserved during the challenge and defending herself by saying she didn’t want to step on Monique’s toes since she was the team leader. Monique, however, isn’t having it so it’d seem a new feud is starting!

8:05 p.m. – For this week’s mini challenge the queens are asked to perfect the art of the celebrity photo bomb, using technology to insert their own photos into another photo featuring celebs. Aquaria‘s photo bomb of a Kanye West and Kim Kardashian red carpet photo is declared the winner! That’s too bad because my favorites were Monique grabbing the crotch of Nick Jonas or Asia O’Hara giving a stank look to Prince William and Kate Middleton!

8:08 p.m. – And for tonight’s maxi challenge the girls are competing in “The Last Ball on Earth,” serving three different looks: Alaskan Winter Realness, Miami Summer Realness and Martian Eleganza Extravaganza. (In layman’s terms that means one ski, one beach and one space look–you’re welcome).

8:13 p.m. – While creating looks in the workroom, the queens give Monet X Change crap (again!) for her sponge look from the premiere episode, but Monet sticks to her guns and continues to defend it (I loved it, to be honest). Asia takes a lead role among the girls, including Monet, by helping them work the sewing machine and teaching them how to cut and create their looks from scratch. One girl that doesn’t take advice from Asia is Aquaria who instead plays around with some craft supplies and gets shaded by Cracker who bluntly says, “she’s going to glue something to a bra.” And, well, that’s just tea, isn’t it?

8:25 p.m. – Prior to the runway ball, Ru stops by the workroom to check up on the girls. In that visit, Asia tells Ru about her experience as a fashion designer outside of the show, expressing that she’s a skilled and creative mind. In other chats, The Vixen opens up to Ru about her reputation in the Chicago scene as an outspoken and political “fire starter” among her peers, Aquaria declares herself as a “look queen” (confident that she’ll perform well this week), and Blair discusses how she’s constantly underestimated because she looks so young.

8:38 p.m. – In a touching moment during makeup application, Blair tells Asia that she sees her as the mom of the competition which leads to the two bonding over their family backgrounds. Asia opens up about the loss of both her parents and how it has humbled her. In another conversation, Cracker asks Aquaria where she thinks the rumor that she has a sugar daddy comes from and Aquaria says that it’s because she looks like a million bucks, insinuating that it’s mostly because of jealousy. Cracker then makes it clear that she is open to the idea of having a sugar daddy and doesn’t want anyone to think she wouldn’t take their money. Welp!

8:49 p.m. – In the first stage of the ball the queens show off their best Alaskan winter look (swimwear) — my personal favorites (aside from Ru’s own bubblegum pop, space age visor with a high and tight pony look) are Asia’s faux nude suit with fuzzy neon balls covering her private parts, Mayhem’s mid-century pinup look and Aquaria’s lucha libre ensemble with a braided pony she whipped all over the place.

9:02 p.m. – For their final presentations, the girls show their Martian eleganza. My favorites this time are Eureka with a shiny and huge headpiece, Aquaria’s villainous black lighting bolt look (this is the one Cracker made a joke about being taped to her body–spoiler alert, it is!) and Dusty’s glittery and actually-made-out-actual-metal corset.

9:11 p.m. – Based on their three looks, the judges deliver critiques to the top three and the bottom three. They compliment Monet for her first look, but then call her second two being arts & crafts projects. Kameron Michaels gets a good critique, but that is quickly overshadowed by the judges drooling over all of Aquaria’s looks. Joining Monet in the bottom is Dusty who is clocked for having beautiful looks that sadly did not meet the standards of the challenge–specifically her Martian look read more as a fairy than it did out of this world. Asia also gets a tough critique, but the other girls rally around her to tell the judges that she helped every other girl in the workroom with their looks, allowing her own to suffer in the process. Cracker is last to hear from the judges and they loved her storytelling with each of her outfits.

9:23 p.m. – With high marks for both Miz Cracker and Aquaria the race is close, but in the end the judges give the win to Aquaria! Falling into the bottom is Dusty Ray Bottoms and Monet X Change, which means both Asia O’Hara and Kameron Michaels are ultimately safe as well.

9:25 p.m. – For their last chance to remain in the competition and even though they are friends before and outside of the show, Dusty and Monet are asked to lip sync for their life to Nicki Minaj‘s “Pound the Alarm.” In the performance both girls go the comedic route, but a third of the way through Monet has all eyes on her and she just delivers moment after moment after moment after moment which means Dusty, though she is also really good, just can’t keep up. Easily the judges decide that Monet will stay and that Dusty will “sashay away.”

Who will be eliminated? Dusty Ray Bottoms

Who will win the mini challenge? Aquaria

Who will win the main challenge? Aquaria

Who will win the lip sync? Monet X Change

Make your predictions so that the contestants can see how they’re faring in our racetrack odds. You can keep changing your predictions until just before the next episode airs on VH1. You’ll compete to win a spot on our leaderboard and eternal bragging rights. See our contest rules and sound off with other fans in our reality TV forum. Read more Gold Derby entertainment news.