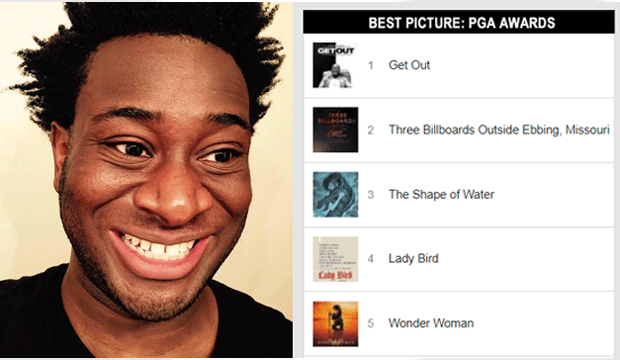 Ronnie Boadu (known by user name “eastwest” at Gold Derby) predicts ‘Get Out’ will win Best Picture at the Producers’ Guild of America Awards on Saturday night (see his rankings) and the ensemble trophy at the Screen Actors Guild Awards on Sunday (rankings).

Pay special attention to his picks for all races all the time at Gold Derby because he routinely ranks high among all users for best accuracy scores.

Listen to our audio podcast chat below for his savvy analysis of the PGA and SAG Awards, plus Oscars.

He’s picking “Get Out” at the PGA and SAG Awards because “It made almost as much money as ‘Wonder Woman. It’s completely original and it’s had a strong response so far.”

Boadu also predicts that “Get Out” will also win Best Picture at the Oscars (see rankings), but he’s got less confidence in that pick right now. “I think it’s between ‘Get Out,’ ‘Three Billboards Outside Ebbing, Missouri’ and possibly ‘Shape of Water.'”

Check out his past predictions and accuracy scores on this page where you’ll see he recently came in third place out of 3,158 people predicting Golden Globe nominations. Use the drop-down menu to see other past scores. He ranked 34th out of 3,547 people predicting the Globe winners; 17th out of 1,146 users predicting 2018 Critics’ Choice Awards nominations. Often you’ll find him featured in our Top 24 Users leagues that rival teams of our Experts and Editors.

Boadu lives in Oklahoma City where he’s a viz operator at KWTV New 9. Listen to our audio podcast below. Do a search for GoldDerby at iTunes to subscribe to our podcast channel.