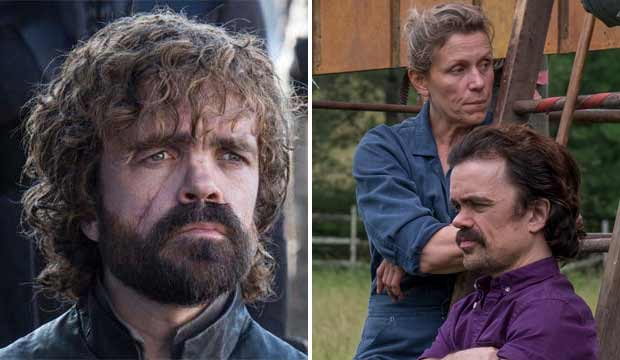 This year’s most nominated performer at the SAG Awards is Peter Dinklage. He contends for his individual and ensemble performances in the drama series “Game of Thrones” and as part of the ensemble for “Three Billboards Outside Ebbing, Missouri.” Could his film role give him the boost he needs to finally win for TV?

Dinklage has already won two Emmy Awards (2011 and 2015) and a Golden Globe (2012) for his work as Tyrion Lannister on “GOT.” He’s also racked up nine SAG Award nominations for the show: five times with the ensemble cast (2012, 2014-2017) and four consecutive individual nominations (2014-2017). And he’s even been recognized for his work on the big screen, landing noms for his supporting and ensemble performance in “The Station Agent” (2003). With 11 past nominations Dinklage is far more overdue for recognition than his fellow [contenders] on the TV side.

But the odds do appear to be stacked against Dinklage as he sits in third place in our predictions with odds of 33/1. He’s going to need more than dragons if he’s going to overcome the frontrunner Sterling K. Brown (“This Is Us”) with leading odds of 2/11 and David Harbour (“Stranger Things”) in second with odds of 12/1. The “Game of Thrones” ensemble’s chances also don’t seem to give fans hope as they rank fourth, also at 33/1. So why should Brown worry about a potential Dinklage upset? Two words: “Three Billboards.”

The ensemble cast of “Three Billboards Outside Ebbing, Missouri” is currently expected to win with odds of 2/13. Dinklage may have limited screen time in his role as James, who has a crush on crusading mother Mildred (Frances McDormand), but he is given his moment to shine as James has a moment of vulnerability during a date with Mildred. “Three Billboards” is this year’s most nominated film, also picking up individual noms for McDormand, Sam Rockwell and Woody Harrelson, so we know SAG voters admire it. And Dinklage’s fellow actors will have seen him in two completely different roles, which could also prove beneficial as it shows his range as an actor.

Should Dinklage win he’ll make history as the first to do so on his fifth try. However, both Michael C. Hall (“Dexter,” 2010) and Bryan Cranston (“Breaking Bad, 2013) needed four nominations before they were victorious. Cranston’s case is especially important to consider. Like Dinklage, he was not the expected winner. The race appeared to be between recent Emmy winner Damian Lewis (“Homeland”) and the reigning two-time SAG Awards champ Steve Buscemi (“Boardwalk Empire”). What we failed to take into account was Cranston’s work in that year’s SAG Award [film ensemble] winner, “Argo,” which might have tipped the race in his favor for “Breaking Bad.” The same factor could help Dinklage finally ascend the SAG throne.