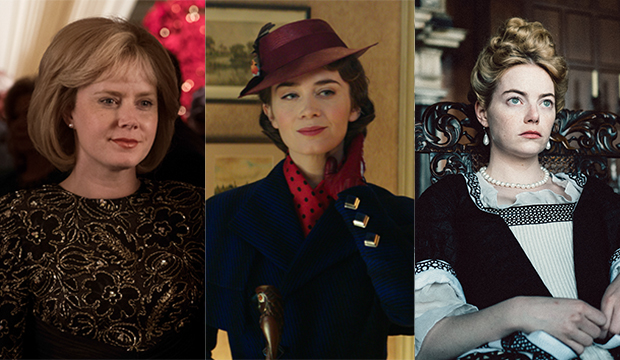 Amy Adams, Emily Blunt and Emma Stone all got two individual Screen Actors Guild Awards nominations on Wednesday, but can any of them turn both their bids into wins?

Only two performers have taken home two individual SAG Awards in one night: Helen Mirren and Idris Elba. Mirren won lead actress en route to her Oscar victory for “The Queen” (2006) and was honored for playing another monarch in the miniseries “Elizabeth I,” for which she later won an Emmy. Elba received SAG Awards for his supporting turn in “Beasts of No Nation” (2015) and for limited series/TV movie actor for “Luther.” He remains the only SAG champ whose performance did not receive an Oscar nomination.

Adams (“Vice”), Blunt (“A Quiet Place”) and Stone (“The Favourite”) are up against each other in the film supporting actress race. They all got a windfall when critical favorite and Oscar frontrunner Regina King (“If Beale Street Could Talk”) was surprisingly snubbed. In our early odds, Adams is favored to win for her performance as Lynne Cheney, followed by Rachel Weisz (“The Favourite”), Stone, Blunt and Margot Robbie (“Mary Queen of Scots”).

Adams and Stone will face off again for their respective limited series “Sharp Objects” and Maniac.” Adams is also the early frontrunner there, so she’s looking good to be the third person to double-fist individual SAG Awards in one night. Stone is in fifth place, behind Patricia Arquette (“Escape at Dannemora”), Patricia Clarkson (“Sharp Objects”) and Penelope Cruz (“The Assassination of Gianni Versace: American Crime Story”).

Blunt’s second bid is for her lead turn in “Mary Poppins Returns”; she’s currently in fourth place, trailing the consensus top three, Lady Gaga (“A Star Is Born”), Glenn Close (“The Wife”), Olivia Colman (“The Favourite”), and ahead of Melissa McCarthy (“Can You Ever Forgive Me?”).

Coincidentally, all three of these double nominees have been up against each other before at the SAG Awards. Two seasons ago, Stone (“La La Land”) won the actress prize over Adams (“Arrival”), Blunt (“The Girl on the Train”), Natalie Portman (“Jackie”) and Meryl Streep (“Florence Foster Jenkins”).