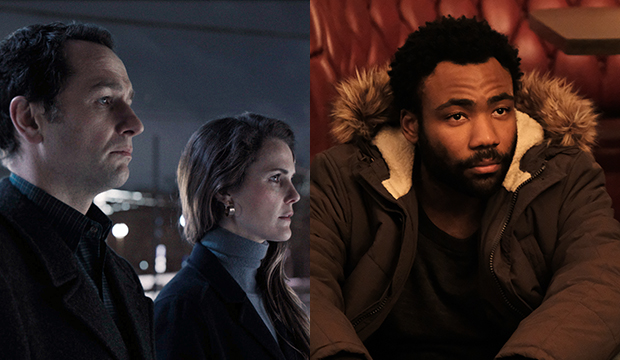 “The Americans” and “Atlanta” each received just one Screen Actors Guild Award nomination on Wednesday — but they were pretty big ones for their network. “The Americans” made the the drama ensemble lineup and “Atlanta” cracked the comedy ensemble equivalent, marking the first time that FX has fielded nominees in those categories.

FX’s SAG Awards success had thus far been limited to individual mentions, including wins for Jessica Lange (“American Horror Story”) and Sarah Paulson (“The People v. O.J. Simpson: American Crime Story”). Neither “The Americans” nor “Atlanta” had earned SAG Awards nominations until now — and good thing it did for the former since this was the show’s last chance.

While “The Americans” missed out on individual nominations for Matthew Rhys and Keri Russell, it’s overall been a pretty good week for the espionage drama as it continues its final awards run on the heels of two Emmy wins. It nabbed three Golden Globe nominations last week, including its first for Best Drama Series, and a leading five Critics’ Choice Awards nominations on Monday.

“Atlanta” also failed to get an individual bid, for Donald Glover, but it did indeed become the latest second-year show, along with “The Marvelous Mrs. Maisel,” to break in with their first SAG Awards nominations. “Atlanta” was snubbed completely its first go-around two years ago while it scored hardware elsewhere.

The cast of the “The Americans” is up against the casts of “Better Call Saul,” “The Handmaid’s Tale,” “Ozark” and reigning champ “This Is Us.”

“Atlanta” is nominated against “Barry,” “GLOW,” “The Kominsky Method” and “The Marvelous Mrs. Maisel.”