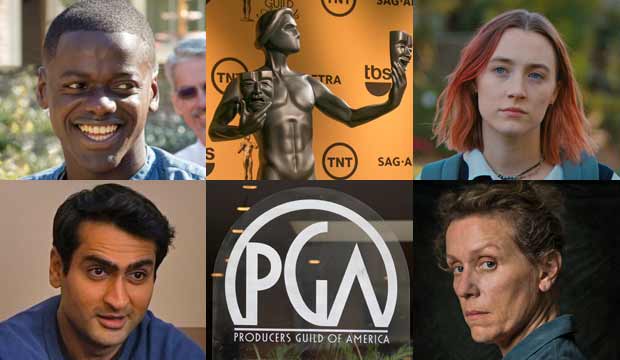 In what has been one of the most confusing awards derbies in recent memory, we’re on the eve of what could be a make-or-break weekend in the Oscar race for Best Picture. The Producers Guild Awards will be handed out on Saturday night, January 20, and the Screen Actors Guild Awards follow on Sunday, January 21. Neither award has a perfect track record anticipating the Oscars, but your odds go way up if you win both awards.

The PGA Awards have been around since 1990, and 19 out of their 28 previous winners have gone on to win Best Picture at the Oscars (68%). The SAG Awards first gave out a prize for the best ensemble cast in 1996, and 11 out of 22 of their winners have won at the Oscars (50%). But there have been 10 years when the two awards groups agreed on the winner, and eight of those ended up taking the Oscar (80%). The match-ups are listed below (the years indicate the year of the awards ceremonies, not the year of the film’s release). The two films that lost the Oscar are highlighted in red.

When “Apollo 13” won PGA and SAG Awards in 1996 it also won the Directors Guild, which makes it the only film in history to win all three without winning the Oscar. The motion picture academy didn’t nominate Ron Howard at all for his directing, and they gave both Best Picture and Best Director (Mel Gibson) to “Braveheart.”

The year “Little Miss Sunshine” won PGA and SAG Awards it was the Directors Guild that set us straight. Martin Scorsese claimed that directing prize for “The Departed,” and at that point there was no stopping him or the film at the Oscars since Scorsese had never won before and Hollywood was determined to make up for those past slights.

This year there are four movies nominated for their ensemble casts at the SAG Awards that are also up for Best Picture at the PGA Awards: “The Big Sick,” “Get Out,” “Lady Bird,” and “Three Billboards Outside Ebbing, Missouri.” The fifth ensemble cast nominated by the SAG Awards is “Mudbound,” which was unexpectedly left off the producers’ list of top films.

As of this writing our overall racetrack odds predict “Three Billboards” to win both awards. However, Guillermo Del Toro (“The Shape of Water”) and Christopher Nolan (“Dunkirk”) are considered stronger contenders at the DGA Awards. Will we see a repeat of 2007 when the directors pointed the way to the eventual Oscar winner? Both Del Toro and Nolan could be considered overdue for recognition, though neither to the same degree that Scorsese was.

But the combined strength of PGA and SAG may be greater than ever nowadays. The PGA Awards and the Oscars adopted a preferential ballot in 2010 (honoring the best films from 2009). That unique voting system emphasizes consensus over passion, which has produced Oscar upsets in the last two years for “Spotlight” and “Moonlight.” Since then all three films that won both PGA and SAG won the top Oscar: “King’s Speech,” “Argo,” and “Birdman.” But that’s admittedly a much smaller sample size, and as we’ve seen in recent years on the awards scene, there’s an exception to every rule.

Ben Feldman ('Superstore'): 'The finale was almost like an emotional Xanax' and 'a giant glass of wine'…