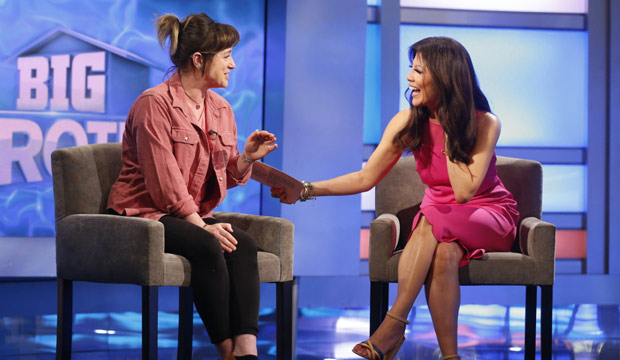 An apologetic Sam Bledsoe emerged from the “Big Brother” in her sweatpants Wednesday night, muttering “Sorry” to host Julie Chen [Moonves] as she approached her. Sam was embarrassed by her appearance after the houseguests learned just moments earlier that one of them would be evicted. Without time to prepare, Sam was sent packing by a vote of 2-0 over JC Mounduix.

SEE‘Big Brother’ 20 episode 37 recap: Who was evicted in 5th place — JC, Sam or someone else? [UPDATING LIVE BLOG]

When asked if she was surprised to be talking to Julie, Sam responded, “Yes I was. Tyler [Crispin] had always said that he had my back in a final two and JC’s kind of annoying. I love his little heart, but he is … annoying.” Unbeknownst to Sam, Tyler has a final two deal with both JC and Kaycee Clark as well, not to mention a showmance with Angela Rummans.

Despite her apparent blindside, Sam doesn’t feel bitter about heading for the jury house. “I don’t think any differently of Tyler or any of them,” she admits. “That’s been my philosophy from day one and it’s not going to change.” However viewers may remember a different side of Sam from a few weeks back when she boasted she would “rip these b*****s to shreds and rip the doors off the hinges” if she was evicted.

Throughout much of the season Sam appeared to be a loner within a game that relies so heavily on alliances. “I think that a lot of the times I did it to myself,” she confesses. “But I guess I’m just so very different. I was not prepared for this experience, but it has been life changing and I’m honored to have been a part of it. I can’t thank you (Chen), y’all (pointing to the audience), CBS, America and my momma and my brother [enough]. I’m still thrilled and tickled to be here.”

Sam will now head to the jury house as Juror #7, joining Bayleigh Dayton, Rockstar Lantry, Faysal Shafaat, Scottie Salton, Haleigh Broucher and Brett Robinson. When asked what she learned about herself throughout this experience, Sam said it would take too long to share but concluded with, “It’s been phenomenal. Radical.”