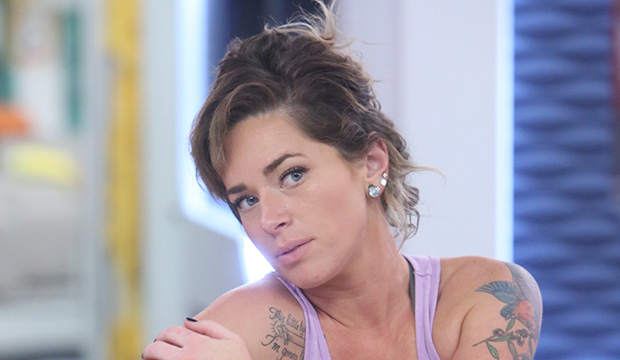 Sam Bledsoe was not happy after being nominated for eviction on “Big Brother” 20. In fact, after Head of Household Kaycee Clark put Sam on the block next to Haleigh Broucher, the welder from Virginia gave a raunchy speech in the Diary Room that had us reaching for the soap (see below). Do you think Sam’s vulgar words were over-the-line? After all, she’s supposedly just a pawn because Kaycee’s real target is Haleigh. Or was Sam justified in her vitriol? Sound off down in the comments section.

SEE ‘Big Brother 20’ spoilers: Which 2 players will be eliminated in double eviction on September 13?

“It just doesn’t seem real,” Sam declared shortly after she was nominated for eviction. “Kaycee promised me that everything would be okay. If this is all a lie, and at the end if it I’m standing there looking like a dumb***, I will tear every door off its f***ing hinges on my way out of this mother****er and I will absolutely rip these b*****s to shreds! I mean lose my mind. And I swear, on everything that’s holy, they will regret it.” Say what you will about Sam’s outburst, but at least she’s keeping the CBS censors employed.

SEE ‘Big Brother 20′ spoilers: Week 11 Power of Veto ceremony results on #BB20 and what they mean for September 13 eviction

Explaining her decision to nominate Sam and Haleigh, Kaycee announced, “This week is going perfect. I have exactly who I want on the block. I have Haleigh as my main target. I have Sam as a pawn. As long as Haleigh does not win the Veto, she’s going to the jury house with the rest of her alliance. Sorry, kid.” The jury currently consists of Bayleigh Dayton, Rockstar Lantry, Faysal Shafaat and Scottie Salton.

Being on the block isn’t something Sam has experienced since way back in Week 1. As you’ll recall, Tyler Crispen won the first Head of Household competition of Season 20 and nominated Sam and Steve Arienta for eviction. During the live eviction night, Tyler’s Level 6 group voted to send home Steve, while Sam received votes from Haleigh’s ill-fated FOUTTE alliance.

Sam still has a chance of saving herself in this week’s Veto competition. Find out who wins the Power of Veto during Wednesday’s episode. And don’t forget, this Thursday will feature the very first Double Eviction of Season 20 when two people will be sent to the jury house.

SEE With only 8 ‘Big Brother’ houseguests left, who do YOU think is the biggest floater of Season 20? [POLL]