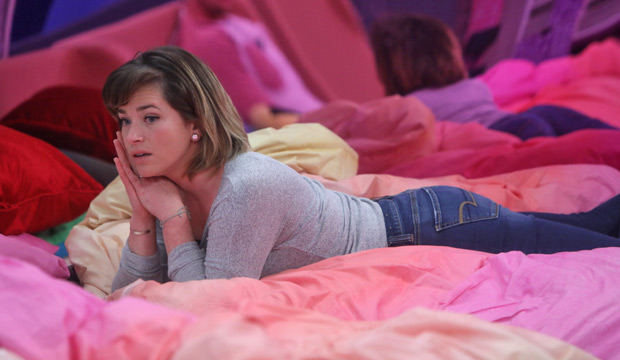 It’s starting to become a weekly tradition that Sam Bledsoe curses at her “Big Brother” 20 houseguests after being nominated for eviction. Last week she threatened to “absolutely rip these b*****s to shreds” after she was nominated. During the double eviction she called Angela Rummans a “b****.” Then during Sunday’s episode Sam’s potty mouth returned in full form. “So now I’m officially on the block for the third consecutive time in less than 48 hours, and it doesn’t feel good,” she announced after being nominated for eviction by Head of Household Angela. “If they don’t respect me, then f*** them!”

Angela put Sam and JC Mounduix on the block because they’re the lone outcasts left in the house. The other two remaining players, Tyler Crispen and Kaycee Clark, have been in a Level 6 alliance with Angela since the very beginning of the season, so it was no surprise to see them avoid the block this week. The only thing that can throw a wrench in Angela’s plan is if Sam or JC wins the Veto. If that happens, then she’ll have no choice but to put up either her BFF Kaycee or her showmance partner Tyler.

“I’m gonna go out and I’m gonna win the Veto,” Sam declared in the Diary Room after her tirade. “And hell, I might win the whole game.”

JC was also “pissed” about being nominated for eviction, saying, “I had Tyler’s back this whole game and he threw me on the block, and now Angela throws me on the block, too. I want to win this Veto so bad. If I win I’m gonna take myself off the block. And then Angela, I’m finally gonna be able to come for you.” So far this season JC hasn’t won a single competition, so history is not on his side to prevail during the upcoming Veto competition.

Who will be voted out in fifth place: Sam or JC, or someone else entirely? Find out during the special Wednesday eviction episode of “Big Brother” on CBS, hosted once again by Julie Chen.