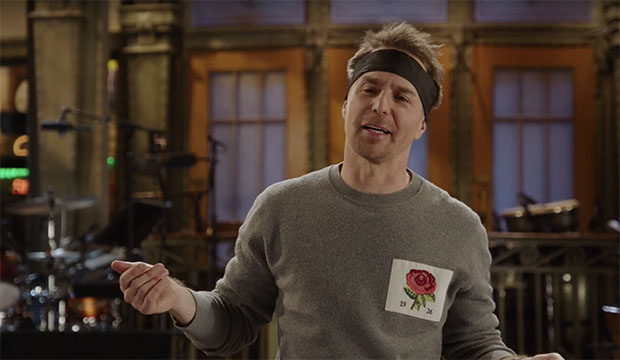 Sam Rockwell (“Three Billboards Outside Ebbing, Missouri”) won a Critics’ Choice Award for Best Supporting Actor Thursday night, but he missed the show for a very good reason: He was in rehearsals to host “Saturday Night Live” this weekend.

Oscar nominees who hosted but didn’t win include Jeff Bridges (“True Grit” [2010), Jesse Eisenberg (“The Social Network” [2010]) and Jonah Hill (“The Wolf of Wall Street” [2013]), the latter of whom memorably brought on co-star and Best Actor nominee Leonardo DiCaprio during his monologue. Amy Adams (“Big Eyes” [2014]) also hosted, won a Golden Globe, but failed to get an Oscar nomination.

This season already, Tiffany Haddish (“Girls Trip”), Saoirse Ronan (“Lady Bird”) and James Franco (“The Disaster Artist”) — all in the running for acting nominations — have taken the “SNL” stage.

In many of the winner instances, the eventual champ was a frontrunner, but every little bit counts for stars as they (or their team) try to find whatever edge they can over the competition. Hosting honors, of course, usually coincide with a film the actor is shilling on a promo tour, and since most Oscar film contenders are released late fall/early winter, that’s when we see Oscar hopefuls live on a Saturday night.

SEE 2018 Critics’ Choice Awards: ‘The Shape of Water’ is the biggest winner with 4 awards including Best Picture

But if you’re in the Oscar race, the best time to host is arguably in January and February, the thick of awards season when voting for various industry honors is in full swing, and hopefully after which you had already picked up an award or two along the way or after which you had already gotten that Oscar nomination. Provided you don’t bomb terribly, the hosting gig, where you can show off another side of yourself and/or impress with a hidden talent no one knew about, keeps you visible and front of mind to people. Even better if a skit becomes a monster hit and heavily circulated and watched online. (Looking further down the line, if you blow the roof off the joint, you might even win a guest acting Emmy!)

In Rockwell’s case, he’s having the best week ever after Golden Globe and Critics’ Choice wins over Willem Dafoe (“The Florida Project”), who had been dominating the critical circuit and who still leads our Oscar odds at 23/10 over Rockwell’s surging 13/5. Oscar nomination voting closes Friday, January 12, so his “SNL” gig won’t have any effect on that, but voting for the Screen Actors Guild Awards winners is open until Friday, January 19. If Rockwell winds up sweeping the rest of the awards, it’s obviously difficult to say how much impact hosting “SNL” will have had, but it definitely won’t hurt.

“SNL” has already set hosts for the rest of January: “Molly’s Game” star and Best Actress hopeful Jessica Chastain, who sits in sixth place in our predictions with 80/1 odds, will make her debut January 20, and “SNL” alum Will Ferrell will take the reins on January 27. February hosts have not yet been announced, but if you’re running an Oscar campaign, now is the time to get your contender inside Studio 8H.

Which Oscar hopeful would you like to see host “SNL” this season?