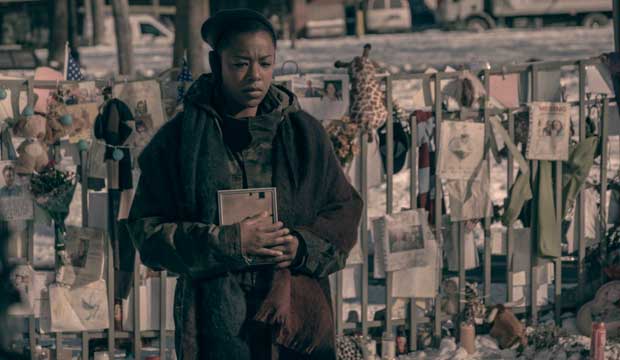 On her second career Emmy nomination, Samira Wiley has just won the trophy for Best Drama Guest Actress for Hulu’s dystopian drama “The Handmaid’s Tale” at Saturday’s 2018 Creative Arts ceremony. In fact, Wiley is now the youngest all-time winner in this Emmy category. See the complete list of winners.

Wiley was actually nominated in the supporting category last year for playing Moira on the first season of “The Handmaid’s Tale,” but moved to the guest race this year because of her decreased screen time. She actually swapped categories with her co-star Alexis Bledel, who won in guest last year and is now nominated as Best Drama Supporting Actress at next week’s live Primetime ceremony.

The episode Wiley chose to submit this year was “After,” in which Moira searches for Odette (Rebecca Rittenhouse), an old girlfriend who has gone missing in the theocratic dictatorship. As she pours through hundreds of photos of the dead, she reflects on her relationship with Odette, her time as a surrogate mother, and her friendship with June (Elisabeth Moss). When she eventually finds Odette’s photo among the dead, she breaks down in tears. She later places her photo in a graveyard devoted to victims of Gilead.

Vote-splitting was a real possibility this year since Wiley was up against two of her co-stars: Cherry Jones and Kelly Jenrette. But she was able to overcome the competition, perhaps because of her impact on the series and because she’s well-known to voters from her time on “Orange is the New Black.” The other three nominees this year were Diana Rigg (“Game of Thrones”), Viola Davis (“Scandal”) and Cicely Tyson (“How to Get Away with Murder”).