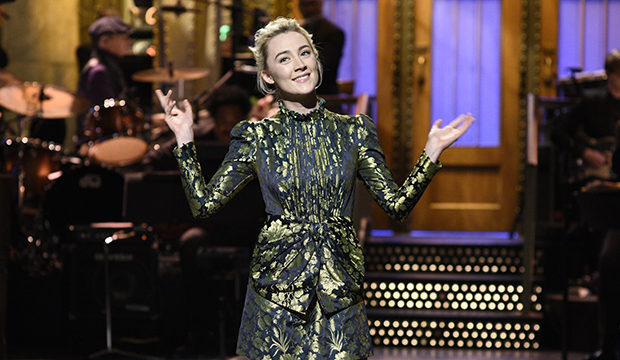 “Saturday Night Live” is submitting just two people at the Emmys for Best Comedy Guest Actress (compared to eight for guest actor): Tina Fey and Saoirse Ronan. Fey is a near lock for a nomination — and a win, per our odds — but could Ronan join her on the shortlist?

Ronan hosted way back in December, so her gig is a distant memory compared to Fey’s stint on the season finale last weekend. But Ronan enjoyed good reviews in a subpar episode and had a hit with the “Welcome to Hell” music video. She’s also a talented, well-liked young star who has since lost her third Oscar, for “Lady Bird.”

“Lady Bird” was a beloved, critically hailed film, but unfortunately went home empty-handed during a majority of the awards season. This could be a “make-up” of of sorts. Much like her “Lady Bird” mom Laurie Metcalf, who’s in second in comedy supporting for “Roseanne,” any residual love for the film could help Ronan here. Plus, voters have been very kind to “SNL” in the guest categories since it was allowed to compete there in 2009, giving the show four wins in comedy guest actress. And it would be kind of adorable if Ronan and Metcalf were nominated together at an awards show again.

Ronan has never been up for an Emmy and is only in 15th place in our odds. Ironically, Metcalf is in ninth place in guest actress, for her stint on “The Big Bang Theory.”