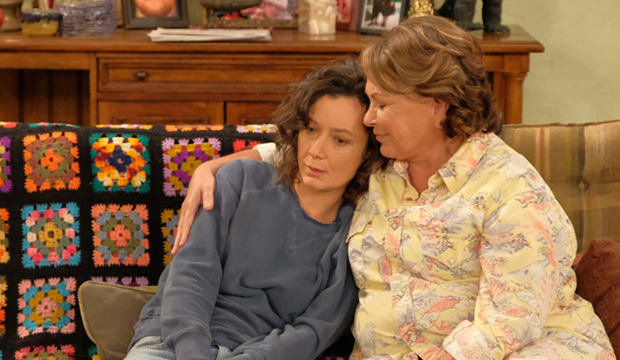 Sara Gilbert says she supports ABC’s decision to cancel “Roseanne” in her first comments about the show’s ignominious end. At the top of Monday’s episode of “The Talk” — the talk show’s first live episode since “Roseanne”’s cancellation last Tuesday — the co-host immediately addressed the elephant in the room.

“I would like to say this has been a very difficult week,” a visibly emotional Gilbert said. “A lot of people have been hurt by this. I will say I am proud of the show we made. The show has always been about diversity, love and inclusion, and it’s sad to see it end this way. I’m sad for the people who lost their jobs in the process. However, I do stand behind the decision that ABC made.”

Gilbert had yet not spoken out about “Roseanne”’s axing in the wake of Roseanne Barr’s racist tweet, in which she compared former Obama aide Valerie Jarrett to an ape. Gilbert had tweeted a statement shortly before the cancellation, telling her followers that she was “disappointed” in her TV mom’s actions and that her “abhorrent” comment does not reflect those of others associated with the show.

SEE ‘Roseanne’ is ‘as dead as a door nail’ at Emmys, readers say

Gilbert was one of the main driving forces behind the nine-episode revival, serving as an executive producer, in addition to reprising her role as Darlene. The series, which returned in March, became the No.1 show of the season and was renewed for a 13-episode 11th season to premiere in the fall. Ironically, the cancellation came the day the Season 11 writers’ room opened.

ABC is reportedly exploring possible spin-offs without Barr’s involvement, including one focusing on Darlene, according to “The Hollywood Reporter.” Gilbert did not address those rumors on “The Talk.”