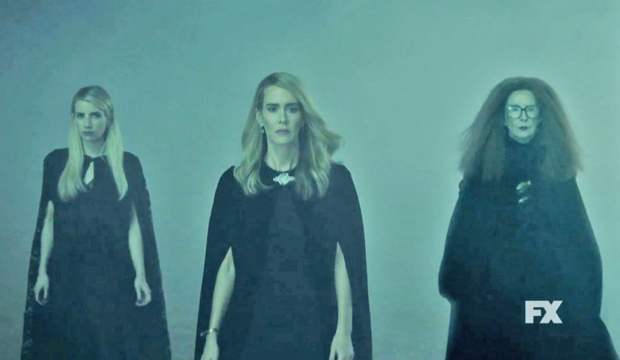 Sarah Paulson just confessed on Instagram that she stole one item from the set of “American Horror Story: Apocalypse” and that “it’s now hanging in my house.” Can you guess what it is? Here’s a hint: the object in question was spotted in the final minutes of Season 8 when Paulson’s Cordelia Goode and Billie Lourd‘s Mallory reunited in the alternate timeline. Paulson joked that she “literally shot the scene, took it off the wall and put it in my car.”

So what did Paulson run off with? The hand-drawn painting of Myrtle Snow, of course! See Paulson’s Instagram post below.

In the final episode, Mallory time-traveled and killed Michael (Cody Fern) at a young age, thereby changing the course of history so that Cordelia never had to bring Frances Conroy‘s Myrtle back to life. You may recall that Myrtle originally died back in “Coven,” and that Cordelia resurrected her years later during “Apocalypse” to help stop the antichrist from destroying the world.

“Dearest Myrtle Snow,” Paulson wrote about the beloved “AHS” character, “Cordelia’s guiding light and true north. I love Frances Conroy with my whole heart. I will miss Cordelia, but will remember her every time I see this.”

The eighth installment of FX’s “American Horror Story” franchise concluded Wednesday, November 14 with a timey-wimey episode that brought back former series regulars Angela Bassett (as Marie Laveau) and Jessica Lange (as Constance Langdon) to great fanfare. What did you think of the Season 8 finale? Let us know by voting in our poll.

Paulson has appeared in all eight seasons of “AHS” while Conroy has popped up in seven cycles: “Murder House,” “Asylum,” “Coven,” “Freak Show,” “Roanoke,” “Cult” and “Apocalypse,” missing out only in “Hotel.”

The one thing I stole from the set… (literally shot the scene, took it off the wall and put it in my car) it’s now hanging in my house. Dearest Myrtle Snow, Cordelia’s guiding light and true north… I ❤️Frances Conroy with my whole heart. I will miss Cordelia, but will remember her every time I see this. #ahsapocalypse