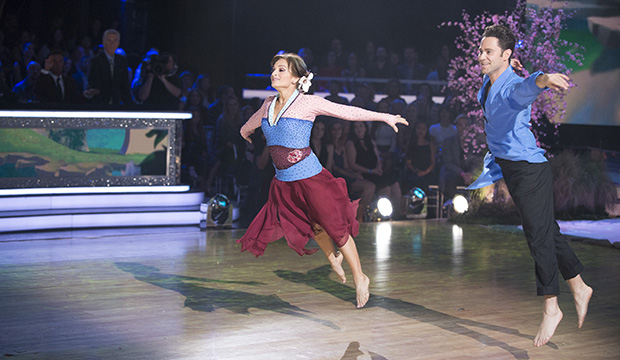 A majority of “Dancing with the Stars” fans wanted the perpetually cursed Keo Motsepe to win Season 27 over four-time finalist Sharna Burgess, but now that she got her Mirrorball, you don’t think Motsepe is the most overdue pro. Nope, 38 percent of you think that title now belongs to Sasha Farber.

Farber, who was eliminated in ninth place this season with Mary Lou Retton, has been on six seasons, first appearing as a pro in Season 17. One of the most easygoing pros, he posted his best finish with Tonya Harding in third place on Season 26. His best chance at a win, however, was arguably with Simone Biles in Season 24, but the pair was shockingly axed in the semifinal. His wife, Emma Slater, ended up winning that season with Rashad Jennings, and you know the show would like to have three pro couples who’ve won Mirrorballs.

Motsepe grabbed 34 percent of the vote. An eight-season pro, he never really had a chance to show off his bona fides until Season 27 with Evanna Lynch, a top-notch contender who brought him to his first semifinal and final in a regular season. Before this, his best finish was sixth place, with Jodie Sweetin in Season 22, right in the middle of this flurry of early exits. Now that Motsepe has proven he’s got the goods, hopefully TPTB will give him another partner who is winner material.

SEE Sharna Burgess got hers, so who’s the most overdue ‘Dancing with the Stars’ pro now?

With 23 percent, Artem Chigvintsev is in third. Like Motsepe, he’s also been on eight seasons, but thanks to Motsepe’s third-place finish with Lynch, Chigvintsev is now the only long-serving pro left who hasn’t made at least a semifinal. His best placement is two sixth-place finishes, with Lea Thompson, in his pro debut in Season 19, and with Nancy Kerrigan in Season 24. The producers were probably hoping for another inspirational run in the vein of Nyle DiMarco and Noah Galloway when they paired him with Danielle Umstead, the show’s first blind contestant, this season, but they were the second couple eliminated.

Coming in last with just 4 percent of the vote is Gleb Savchenko, who made his “Dancing” debut the earliest of these four, in Season 16. He returned seven seasons later, finishing fourth with Jana Kramer, but he hasn’t been able to make it to the business end of the season since then, placing ninth with Erika Jayne (Season 24), 10th with Sasha Pieterse (Season 25), seventh with Arike Ogunbowale (Season 26) and 13th — aka last — with Nikki Glaser this season. Is he the new Keo with these early exits?