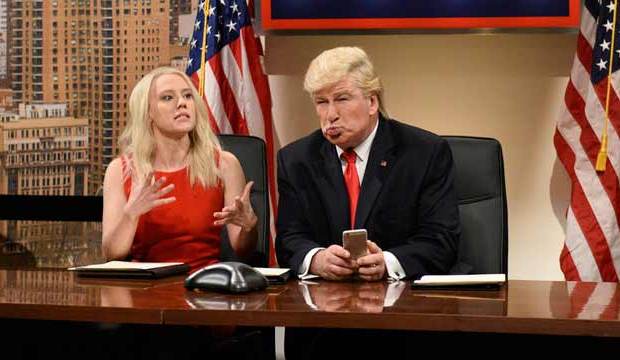 It’s a good day for actors associated with “Saturday Night Live,” both past and present. The NBC sketch series earned 21 Emmy nominations this morning, including a whopping nine citations for acting. Nominated cast members for 2018 include Kate McKinnon, Leslie Jones, Aidy Bryant and Kenan Thompson, on top of recurring guest Alec Baldwin and guest hosts Donald Glover, Tina Fey, Tiffany Haddish and Bill Hader. The love for “SNL” extends beyond the current cast, though, as there are many alums who have since moved on to other projects that were also nominated this year.

Former staff members recognized in the 2018 Emmy nominations include Fey for producing “Unbreakable Kimmy Schmidt,” Hader for starring in, directing, writing and producing “Barry,” Larry David for starring in “Curb Your Enthusiasm,” Maya Rudolph and Molly Shannon for their respective guest spots on “The Good Place” and “Will & Grace,” Seth Meyers for writing his late night show, Jimmy Fallon for producing his short form variety series, and John Mulaney and Martin Short for writing their variety specials. It seems that more than ever there is major respect for “SNL” even as its cast and writing staff move on to bigger and better things.

These are the first acting nominations for Thompson and Bryant, who have been on the series since 2003 and 2012, respectively. Thompson’s nomination is most noteworthy, considering he is now the longest tenured cast member in “SNL” history at 15 years. Now known as the elder statesman of the cast, this is most certainly an overdue nomination, despite technically earning his first bid last year in Best Original Music & Lyrics for co-writing the song “Last Christmas.” As for Bryant, she was also previously nominated for writing an “SNL” song in 2014, but as an actress she has been on the rise, having branched out to other roles in film and television. Thompson is nominated for Best Comedy Supporting Actor with Baldwin, last year’s winner, while Bryant is nominated alongside McKinnon and Jones in the Best Comedy Supporting Actress category, where McKinnon has won two years running; Jones was also nominated last year.

SEE Ready the trolley! Ted Danson and Maya Rudolph put ‘The Good Place’ on the map with two Emmy nominations

“Saturday Night Live” is the favorite to win Best Variety Sketch Series again this year, considering the show has more nominations than its five competitors (“At Home with Amy Sedaris,” “Drunk History,” “I Love You, America,” “Portlandia” and “Tracey Ullman’s Show”) combined. While “SNL” may have dipped slightly in buzz and headline-making stories compared to last season’s highs, the Emmys have certainly not fallen out of love with the show. It may be no coincidence that this year’s hosts are the show’s Weekend Update anchors Colin Jost and Michael Che, while the ceremony will be produced by the boss himself, Lorne Michaels.