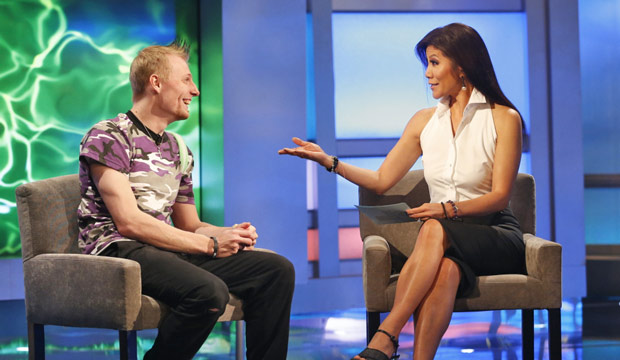 Scottie Salton exited the “Big Brother” house for the second time during Thursday’s live eviction episode, following a racy speech in which he told his fellow houseguests to “suck it” and was bleeped numerous times. He then stormed through the front door and awkwardly greeted host Julie Chen, stating, “I’m unpredictable. They just don’t know what to do with me.” Scottie was evicted in a unanimous 5-0 vote over Haleigh Broucher just one week after battling his way back into the house. Gold Derby readers correctly predicted Scottie would be sent packing once again.

Chen pressed Scottie, asking why he didn’t try to play more predictable and consistent if that is what cost him his game? “I was so tame this entire thing,” he responded. “There were times I would have loved to have popped off. There were times I would have loved to just run around, but I kept it even keel. It got me nowhere.” Scottie had been told all week that he was just a pawn, but he had his doubts, proclaiming, “I had a feeling they were going to get rid of me. They’re not very good liars.”

Before re-entering the game last week, Scottie said he planned to try to get back in Tyler Crispin‘s good graces. Did he still think that was the right strategy? “Tyler was my best option because I feel like I had a connection with him. Obviously I was wrong,” Scottie remarked. “I thought he was in with so many different groups, that if I got in with him I’d be safe. He’s kind of a coward because whatever the house wants is what he does.”

Scottie did try to form a close bond with Tyler, it just wasn’t effective. “I was up in that HOH Room throwing back like no one’s business,” he said. “We made jokes. I told him so much info. I was up there for like an hour and a half! I guess some people live up there, but I can’t sit up there and suck up like that. That’s just not me.”

It is no secret that Scottie has had a crush on Haleigh all season, but had he stayed, would he have remained loyal to her or Tyler? “Going in, Tyler would have been better because he had numbers to back him up. But I prefer Haleigh. I also would have put Tyler [on the block] if I won.”

At the close of his interview, Scottie got a chance to view goodbye messages from some of the houseguests. For the first time, many seemed to be finally thinking about jury votes. Tyler admitted to having the secret Power App, but he was never forced to use it. “Tell your friends,” Tyler boasted. JC Mounduix and Brett Robinson both threw Tyler under the bus, saying it was his idea to evict Scottie (which is false). So will Scottie run back and tell the jury what Tyler wants him to? “I’m not telling them nothing!” he exclaimed.